Japan’s births fall below 900,000 for the first time on record 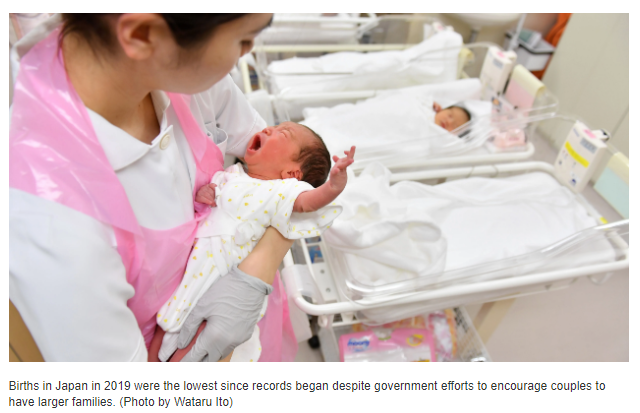 TOKYO — The number of babies born in Japan has fallen drastically this year, slipping below 900,000 for the first time on record.

The health ministry announced on Tuesday that Japanese births totaled 864,000 in 2019, a decline of nearly 6% from the year before. The tally is the lowest since the government began collecting data in 1899.

Along with the record-low number of births, Japan saw a continued drop in population, with deaths outstripping births by a wide margin. The country saw a natural population decrease — that is, deaths in excess of births — of more than 510,000 this year, the first time the fall has exceeded 500,000.

One of the main reasons for the decline in births is the shrinking female population in the prime childbearing age range, 25 to 39 years old. According to the internal affairs ministry, as of July 2019, there were 9,690,000 women between the ages of 25 to 39 in Japan, 210,000 fewer than the same month a year earlier.

“This generation went through Japan’s employment ‘ice age,’ and delayed childbirth into their later years,” said Miho Iwasawa, a director at the National Institute of Population and Social Security Research. “This has lifted birthrates recently, but also resulted in the sharp decline we currently see.”

The slump in Japan’s birthrate is accelerating rapidly despite a government push to encourage people to have more children. Steps include the “Basic Law on Measures for the Society with the Declining Birthrate,” which was enacted in 2003. Since then the government has tried to promote a better balance between work and parenting, and encouraged men to take a more active role in child care. It has also worked to whittle down the number of children waiting for places at day care centers, offered free child-care programs and introduced labor reforms.

The country’s total fertility rate, or the average number of children a woman has in her lifetime, has recovered in recent years, after hitting 1.26 in 2005, but has fallen again since 2015.

Last year, the total fertility rate was 1.42. The government has set a target of raising the fertility rate to 1.8 by 2025, but there appears to be no magic bullet for encouraging bigger families.

“As long as the population of young people is declining, any measures taken by the government to counter the declining childbirth issue will not yield any dramatic effects,” said Akihiko Matsutani, an emeritus professor at the National Graduate Institute for Policy Studies. The country must “shift to a society and economy based on the premise that population will decline,” he said.