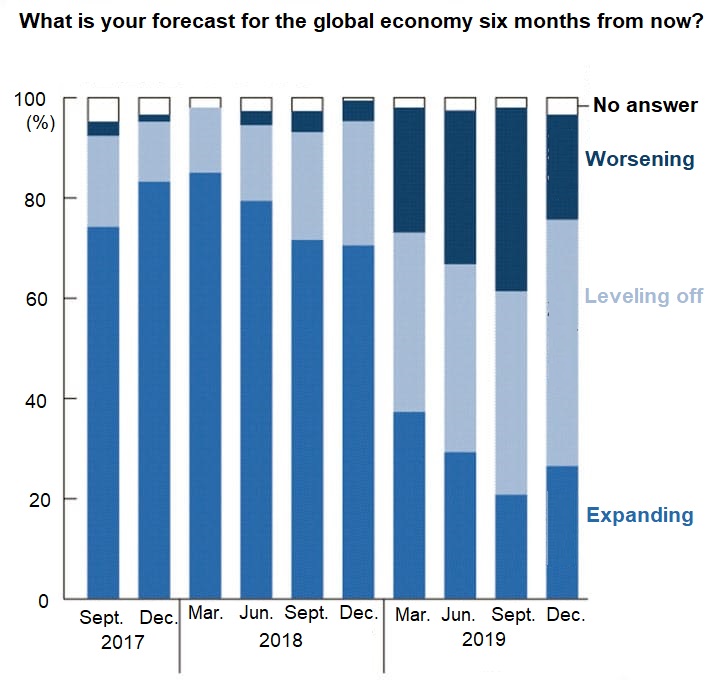 TOKYO — Japanese executives are starting to show less pessimism about the state of the global economy as the strength of the U.S. expansion alleviates concerns about domestic consumption and China’s slowdown, according to a quarterly Nikkei survey of more than 100 corporate chiefs.

The total share of respondents saying the economy is deteriorating, or deteriorating moderately, fell to 34.7% — down 6.6 percentage points from the previous survey in August and September. This marked a turnaround from a steady rise in negative sentiment since December 2018.

Those seeing the economy growing ticked up 0.8 point to 22.9%. Of these, 84.8% cited the expansion in the U.S., where a strong job market and record-high stock prices are underpinning brisk consumer spending.

Respondents expecting the global economy to worsen in half a year dropped 15.7 points to 20.9%, while 26.4% expect improvement, up 5.7 points from last quarter.

The poll was taken from Nov. 28 to Dec. 16. More than 90% of the responses from presidents, chairmen and other top executives at 144 major companies came in before Washington and Beijing announced a partial “phase one” trade agreement on the night of Dec. 13 Japan time.

“U.S.-China trade tensions could shift toward easing for a time ahead of the U.S. presidential election in 2020,” Daiwa Securities Group President Seiji Nakata said.

Yet 86% of respondents named trade friction between the world’s two largest economies as a risk to the global economy. A cooling Chinese economy was cited by 68%, and many showed concern about consumer spending in Japan.

Meanwhile, hopes are high for a rebound in semiconductor prices as fifth-generation wireless technology starts to take off.

“Companies have been continuing investment in digitization and other forms of technological innovation,” said Hitoshi Ochi, president of Mitsubishi Chemical Holdings. “If the environment improves, I think [the economy] will start recovering around the summer of 2020.”