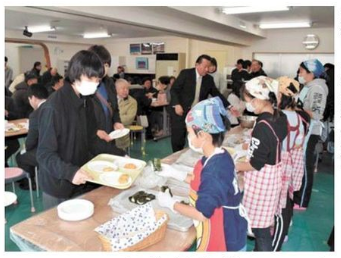 For more than 70 years, the local community has been supporting the Shunko Gakuen orphanage (Koyabe, Yokosuka City), which was established immediately after Japan’s defeat in World War II.

The Naval Facilities Engineering Command Far East (NAVFACFE), headquartered at the U.S. Navy’s Yokosuka base, is one of the groups that have been supporting the orphanage since it was established. The unit has been collecting donations by holding charity events on the base and organizing exchange events for the orphanage’s children and U.S. service members and their families about five times a year.

This year, the unit invited the children to a Christmas party held for officers on the base on Dec. 11 to celebrate the holidays together, and gave presents to each of the children.

In return, the orphanage held a mochi rice-pounding party on Dec. 21 to express its appreciation for the long-standing support. The orphanage invited some 120 local residents, volunteer U.S. Navy service personnel, and people from the municipality and teachers to the event and treated to freshly pounded rice cakes and hot miso soup containing pork and vegetables.

NAVFACFE Commanding Officer Captain Tim DeWitt, 49, who tried his hand at rice pounding for the first time, smiled and said, “We’re happy if the children are happy.” Shunko Gakuen Director Hidekazu Koyama said: “For the children who often spend the year-end and New Year’s holidays at the orphanage, nothing is more enjoyable than warm exchanges with the local community. We’ll do our best to enable the children to become independent with the help of the local community.” (Abridged) 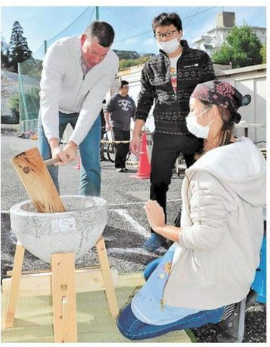