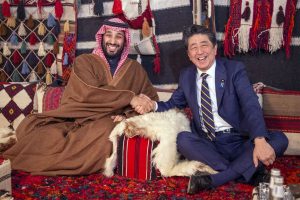 The Monday and Tuesday editions of all national dailies reported from Riyadh on Prime Minister Abe’s meetings with top Saudi Arabian leaders, including King Salman, Crown Prince Mohammed bin Salman, and Foreign Minister Faisal bin Farham over the weekend. The premier briefed the Saudi officials on Japan’s plan to send military assets to the Middle East to ensure the safety of Japanese tankers and cargo vessels there. The crown prince endorsed the Japanese plan by saying: “We support Japan’s commitment completely.” The two sides reportedly exchanged views on the escalating tensions between the U.S. and Iran, agreeing to enhance cooperation to defuse the situation. They also reportedly discussed bilateral relations with an eye toward deepening economic and energy partnership. Mainichi and Sankei said that although Abe is keen to serve as a facilitator of dialogue between the U.S.-Saudi camp and Iran, this will be extremely difficult.

Meanwhile, NHK reported this morning that visiting PM Abe and Abu Dhabi Crown Prince Shekih Mohamed bin Zayed Al Nahyan agreed on Monday that various diplomatic efforts must be made to bring stability to the Middle East. During an hourlong meeting in Abu Dhabi, the two leaders reportedly agreed to work closely with Saudi Arabia and other nations. On the deployment of SDF units to the region, the Crown Prince reportedly said his country will provide concrete cooperation and support. Abe reportedly told the Crown Prince that all visitors from UAE to Japan will be exempted from visas. The two leaders also agreed to increase the amount of crude oil from the Emirate of Abu Dhabi stored in tanks in Japan from 1 million to 1.3 million kiloliters. The network said Abe will visit Oman on the last leg of his Middle East tour today.