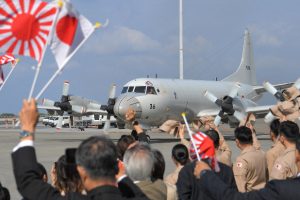 The Sunday editions of all national papers reported that a 60-member MSDF unit departed Okinawa for the Middle East on Saturday aboard two P-3C planes, saying that they are expected to start collecting intelligence on Jan. 20 to ensure the safety of Japanese commercial vessels in the Gulf of Oman and other designated areas while simultaneously engaging in anti-piracy operations off the coast of Somalia. During a sendoff event at an SDF base, Defense Minister Kono said: “It is extremely important to ensure the freedom of navigation of Japanese ships in the Middle East, which is the world’s primary supplier of energy…. I want you to carry out your duties with courage and pride.”

Saturday’s Mainichi and Sunday’s Asahi both ran prominent inside-page articles on concerns of Middle East-bound Japanese MSDF members, explaining that they are worried about whether they can perform two separate missions simultaneously. Under the cabinet decision on the deployment, the P-3C unit is tasked with collecting intelligence for ensuring the safety of Japanese commercial ships “to the extent that the mission does not hinder the anti-piracy operation.” An unnamed MSDF pilot cited by Mainichi reportedly said it is impossible to perform two separate missions during a single flight. The MSDF personnel are reportedly wondering whether they can properly deal with a situation in which a Japanese ship is about to be attacked while a separate Japanese vessel is already being targeted by pirates.

In a related story, today’s Sankei published the results of its latest public opinion poll that put support for the SDF deployment to the Middle East at 49% and nonsupport at 35.3%. More than four out of five respondents said Japan should conduct diplomacy in a manner that allows it to maintain friendly relations with both the U.S. and Iran.