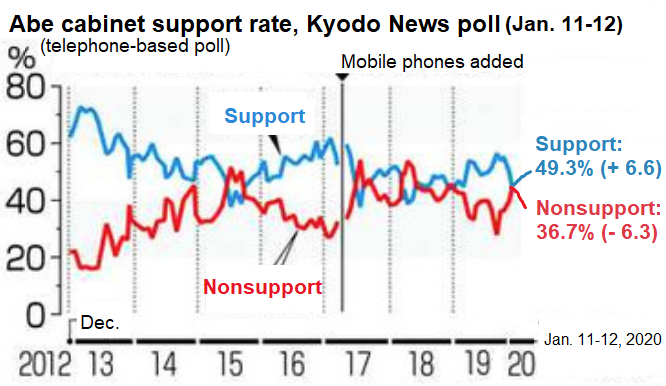 TOKYO — More than 70 percent of people want the government to review plans to build casinos in Japan, a Kyodo News survey showed Sunday, following a bribery scandal involving lawmakers and a Chinese company.

The opinion poll, conducted Saturday and Sunday, also found 58.4 percent oppose Japan’s naval dispatch to the Middle East on an information-gathering mission amid tensions between the United States and Iran while 34.4 percent support it.

The approval rate for Prime Minister Shinzo Abe’s Cabinet rose 6.6 points to 49.3 percent from December, with the disapproval rate standing at 36.7 percent, down 6.3 percentage points, according to the poll.

The telephone survey showed 70.6 percent said the government should review its plans to open “integrated resorts” or IRs — complexes that include casinos along with hotels and conference facilities — while 21.2 percent said the plans should progress without a review or any changes.

Japan recently legalized casinos only at IRs, with the government planning to choose up to three locations for the resort complexes, expected to start operating in the mid-2020s.

The screening process will involve casino operators submitting business plans in cooperation with local governments of towns and cities hoping to host such resorts.

In the meantime, Tsukasa Akimoto, a former member of Abe’s ruling Liberal Democratic Party and proponent of casino resorts in Japan, was arrested in December on suspicion of receiving 3.7 million yen ($33,800) in bribes from Chinese gambling operator 500.com Ltd.

Prosecutors have also interrogated five other lawmakers seen as promoting IRs, while tracing money allegedly brought into Japan by a former adviser to the company in violation of the foreign exchange law.

The Cabinet approval rate increase came as Abe embarked on a five-day trip to the Middle East on Saturday, visiting Saudi Arabia, the United Arab Emirates and Oman, as part of Tokyo’s efforts to help reduce tensions in a critical region for resource-poor Japan.

With respect to the SDF’s first long-term intelligence-gathering mission abroad, the P-3C Maritime Self-Defense Force surveillance aircraft will start the mission on Jan. 20, while the destroyer Takanami will leave Japan on Feb. 2, according to the Defense Ministry.

As Abe has been facing severe criticism over handling of documents concerning publicly funded annual cherry blossom viewing parties at the center of yet another allegation of cronyism, 86.4 percent said he failed to sufficiently explain himself to the public.

Asked about the most appropriate time to dissolve the lower house for a general election, 46.1 percent said “after the Tokyo Olympics and Paralympics,” followed by “in the next year or later” at 36.1 percent. The four-year term of House of Representatives members will end in October 2021 unless Abe dissolves it.

On who to support as a candidate to succeed Abe as next LDP president and prime minister, 18.2 percent support Shigeru Ishiba, a former secretary general of the party, while 13.1 percent hope Abe would remain in office and 11.8 percent endorse Environment Minister Shinjiro Koizumi.

The survey also showed that a total of 86.2 percent are “anxious” or “somewhat anxious” about Japan’s economic outlook.

While Abe is seeking the first-ever amendment of the country’s pacifist Constitution, 52.2 percent oppose the idea while 35.9 percent support it.

[Polling methodology: The survey was conducted by telephone on a computer-aided random digit dialing (RDD) basis on Jan. 11–12, 2020, targeting voters across the nation. However, the survey excluded landline numbers in some areas of Fukushima Prefecture. The survey covered 737 randomly selected households with eligible voters nationwide [by landline phone], with responses collected from 521 people. A total of 1,225 people were accessed through their mobile phones, of which 514 responded.]