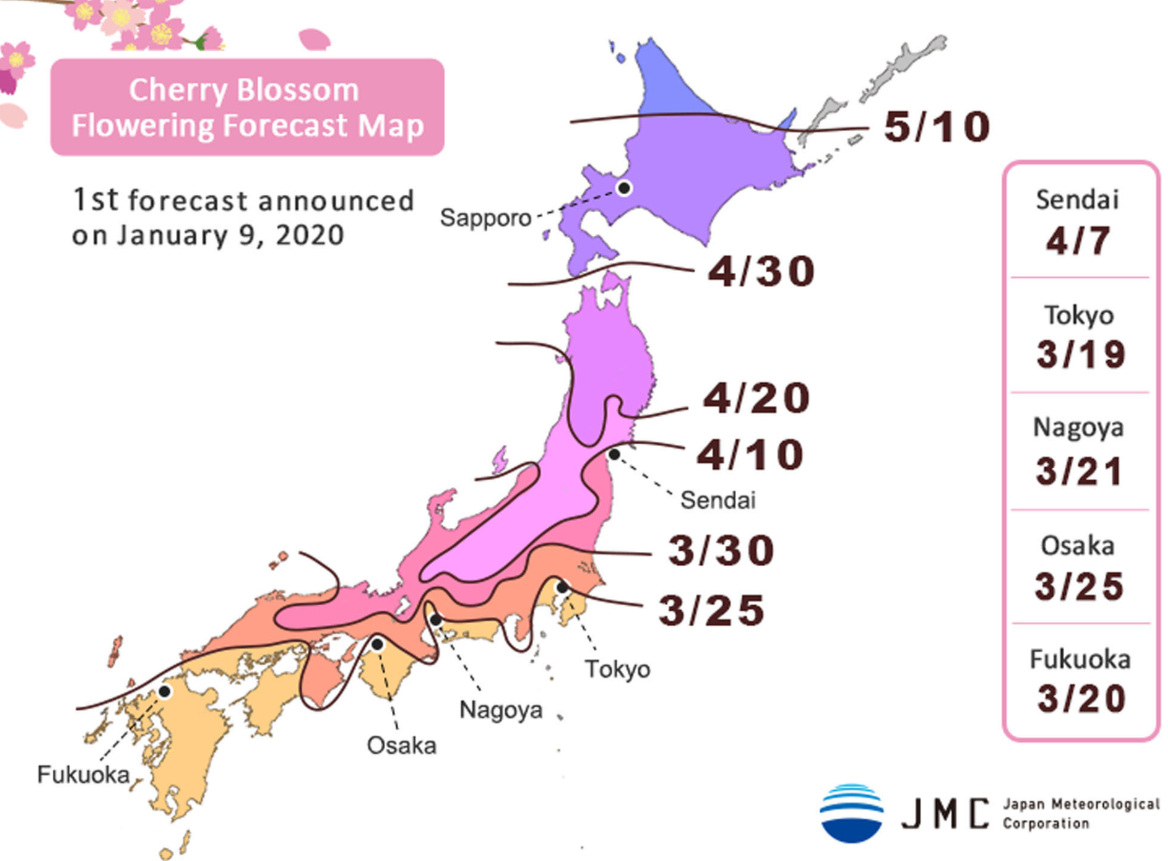 Cherry blossom season is expected to arrive in Tokyo a week earlier than usual this year, with full bloom expected on March 27, according to a forecast released Friday by Japan Meteorological Corp., an Osaka-based weather-forecasting company.

The firm said Tokyo and Kochi prefectures will be the first to observe the start of the iconic bloom on March 19, also earlier than last year.

According to the Meteorological Agency, the blossoms began blooming in Tokyo on March 21 last year.

The company said the early arrival of the flowers is related to high temperatures in autumn and winter, as well as projected warm and sunny spring weather. The warming trend has been observed in the capital since 2013.

According to the forecast, which is subject to updates, other parts of the country should also prepare for an earlier cherry blossom season this year due to warm weather predicted to prevail across the nation throughout spring.

The cherry blossoms are expected to arrive on March 20 in Fukuoka, March 21 in Nagoya, March 22 in Hiroshima, March 23 in Kyoto, March 25 in Osaka and Kagoshima, April 1 in Kanazawa and April 7 in Sendai, the company said.

The flowers are expected to reach full bloom on March 27 in Tokyo and Kochi, March 29 in Fukuoka, April 1 in Osaka, Kyoto and Hiroshima and on April 12 in Sendai.

In Hokkaido, the flowers are expected to start blooming on May 1 and reach full bloom on May 5.

The forecasting company’s predictions cover about 1,000 locations across the country ranging from Kyushu to Hokkaido.

The forecast is based on data derived from studying the blooming characteristics of the someiyoshino (Yoshino cherry tree), which is the most common type and known for its pale pink flowers.

Okinawa Prefecture is usually the first to see the arrival of cherry blossom season, due to the region’s subtropical climate. But the varieties blooming in January in Okinawa — okanzakura and kanhizakura — differ from those in the rest of the nation.

More information can be found at the company’s website at n-kishou.com/corp/news-contents/sakura/?lang=en.