TOKYO — A fifth of Japan’s crude oil reserves may become inaccessible during winter, a recent government inspection found, forcing the country to reevaluate its preparedness for a potential Middle East energy crisis.

The government manages about 60% of the stockpile, spread out across 10 locations nationwide. But four locations may be inaccessible to oil tankers during winters because of rough seas, based on inspections conducted after a Japanese tanker was attacked near the Strait of Hormuz in June.

The findings add urgency to the energy-poor nation’s planning as tensions rise between the U.S. and Iran. Around 90% of Japan’s crude oil imports come from the Middle East.

Under Japanese regulations, crude tankers cannot dock for loading if waves are higher than 1.5 meters or if wind speed is over 15 meters per second. In addition, the Fukui base has no piers and requires divers to connect tankers to oil pipelines, which is difficult “even when waves are not as high as the limit,” an industry insider said.

Each location also stores different types and quantities of oil. Without a detailed management plan in place, nearby refineries may be unable to process the entire stockpile should that become necessary.

Japan Oil, Gas and Metals National Corp., which manages the government reserves, downplayed the risks associated with a potential long-term blockade at the Strait of Hormuz, near Iran. “Private-sector reserves can provide an uninterrupted supply of crude for three months, so we can respond flexibly,” an agency representative said.

The Japanese government has never tapped its strategic oil reserves since it began stockpiling the fuel in 1978, although private-sector stockpiles have been tapped on several occasions. But tensions in the Middle East have only worsened following a U.S. airstrike that killed Gen. Qassem Soleimani, leader of Iran’s elite Quds Force.

Tokyo has begun discussing potential problems accessing stockpiles, especially those along the Sea of Japan coast, with the Petroleum Association of Japan. It plans to propose solutions in its new strategy on natural resources to be released by the end of March.

The government is expected to choose the order for different storage facilities to be tapped depending on weather conditions, as well as designate specific refineries that will receive the oil. It plans to conduct drills to prepare for high waves during winters.

Japan has one of the largest stockpiles among International Energy Agency members, following Estonia’s roughly 400-day supply and the U.S.’s stockpile of over 300 days’ worth. 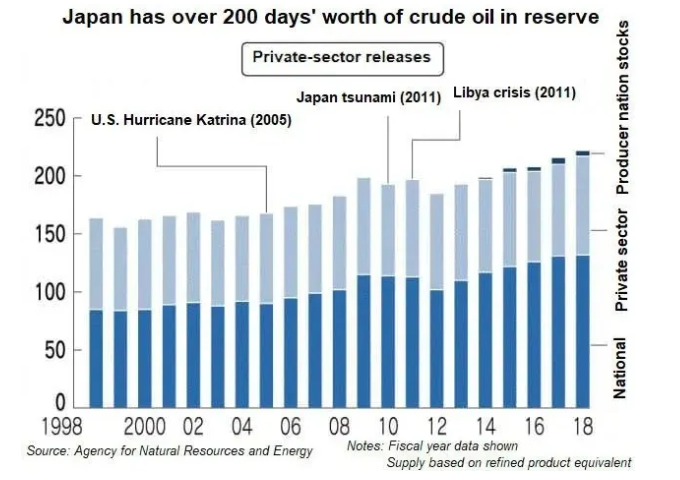