Commentary: Japan’s move toward a diverse and inclusive nation? 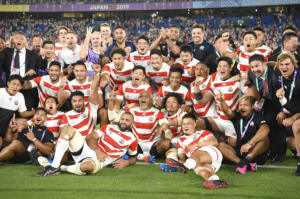 2019 must be remembered in Japan as the year when the Heisei Era ended and the era of Reiwa started, but the buzzword of the year was definitely “One Team.”

In the Rugby World Cup held here last fall, Japan beat powerful teams like Ireland and Scotland to advance to the final stage for the first time. In line with its “One Team” slogan, 31 players of the Japan team — including 15 from six other countries such as New Zealand, Tonga and South Africa, chosen by head coach Jamie Joseph — were united as they fought their way to the feverish cheer of men and women of all ages throughout the country. Not a few people must have seen in the team’s excellent performance the path toward the future that Japan should take.

2019 was also a year that set in motion the government’s measures toward intercultural cohesion. The revised immigration control law to start accepting foreign workers under a new visa program entered into force, and the Immigration Services Agency, tasked with supporting foreign residents and formation of a cohesive society along with immigration control, was set up as an external bureau of the Justice Ministry in April. A legislation to promote Japanese-language education for foreigners both here and overseas was also implemented in June.

The changes taking place in the country may be symbolized by Puranik Yogendra, known as Yogi, who was elected last April as a municipal assembly member in Edogawa Ward, Tokyo.

He is one of the very few local assembly members in Japan who were born abroad and the first one of Indian descent.

Yogi came to Japan to study in the late 1990s, and has lived in the ward, which has a large Indian population, since 2005. He became a naturalized citizen in 2012. Since winning a seat in the municipal assembly, he has frequently appeared in the media to deliver messages for building an intercultural society in this country.

The government insists that it does not promote an immigration policy. But as of the end of last June, the number of foreign residents in Japan reached a record 2.83 million, with about a half of them being long-term residents. On the other hand, the number of babies born in 2019 fell below 900,000 for the first time since relevant statistics were first taken in 1899 — yet more evidence of the nation’s rapidly aging and shrinking population.

Meanwhile, local governments whose areas have large numbers of foreign residents are steadily pushing measures to help them settle in their local communities. The city of Hamamatsu, Shizuoka Prefecture, which has the largest Brazilian population in Japan and is known as leading the way in promoting intercultural cohesion, joined the Intercultural Cities Program, an international network of cities organized by the Council of Europe, in 2017 as the first Asian city. The Hamamatsu mayor hosted an international conference in October, inviting the mayor of Botkyrka, Sweden, and the deputy mayor of Ballarat, Australia — both members of the program — to exchange opinions on policies and practices to enhance intercultural cohesion.

The city of Kawasaki, which has a large Korean population and is known as another leader in promoting intercultural cohesion, enacted an ordinance in December to impose criminal penalties on those who commit hate speech against foreign citizens — the first measure of its kind throughout the country, which lacks national legislation to penalize hate speech.

Minato Ward, Tokyo, and Ikuno Ward, Osaka, in 2018 started projects to encourage Japanese citizens to learn “plain Japanese” in an attempt to facilitate deeper communication between them and local foreign residents. The initiative originally stemmed from recognizing the need for local governments to provide information to foreigners during disasters,

Last year, the use of plain Japanese spread to other local governments, including Tokyo, and the Immigration Services Agency decided to create a guideline for using the simpler language form. Thus 2019 became a landmark year for promoting plain Japanese.

In 2020, Tokyo hosts the Olympic and Paralympic Games for the second time. One of the three core concepts for the games is “unity in diversity.” The Tokyo Metropolitan Assembly passed an ordinance in 2018 to prohibit discrimination against sexual minorities and hate speech targeting non-Japanese.

The Games’ organizing committee declares, “Accepting and respecting differences in race, color, gender, sexual orientation, language, religion, political or other opinion, national or social origin, property, birth, level of ability or other status allows peace to be maintained and society to continue to develop and flourish.” It goes on to say that the “Tokyo 2020 Games will foster a welcoming environment and raise awareness of unity in diversity among citizens of the world.”

There may be a deep-seated image of Japan as a homogeneous and exclusive nation, but in 2020 the world will witness whether Japan is moving toward building a diverse and inclusive nation.

Keizo Yamawaki is a professor at the School of Global Japanese Studies, Meiji University, and a leading scholar on Japanese immigration policy who has advised national ministries and local governments.