Despite electoral landslide, ‘new era’ of Sino-Japanese ties strikes fear into the hearts of Taiwan’s leaders 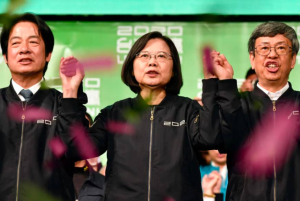 TAIPEI – The re-election of Taiwan President Tsai Ing-wen, whose party favors independence from China, comes at a time when Japan has recently pledged to open a “new era” of ties with the Communist-ruled mainland.

Following the outcome of Saturday’s presidential election, Tsai of the Democratic Progressive Party is expected to push policies countering the “one country, two systems” framework that Beijing is threatening to impose on the self-governing island.

In the legislative election, the DPP secured 61 seats, retaining its majority in the 113 chamber, while the KMT won 38 seats.

Japan expects Taiwan will continue to “contribute to the peace and stability in the region,” Foreign Minister Toshimitsu Motegi said in a statement Saturday, adding “Taiwan is an important partner and a precious friend of Japan.”