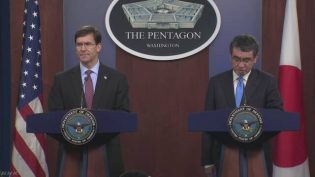 NHK reported this morning on a meeting between Secretary of Defense Esper and Defense Minister Kono at the Pentagon on Tuesday, quoting Kono as telling reporters during a joint press conference: “First we discussed the situation in the Middle East, including the recent developments in Iran. I also explained the cabinet decision made in December last year to send the Self-Defense Forces to the Middle East.” The network quoted Secretary Esper as saying: “I would like to thank the minister for Japan’s decision to deploy its Self- Defense Force assets to the Gulf of Aden, the Gulf of Oman, and the Arabian Sea.” During the meeting, Kono reportedly explained to his U.S. counterpart that he will continue to tenaciously make diplomatic efforts to ease tensions and bring stability to the region and ordered the deployment of SDF units. In response, Secretary Esper reportedly expressed his appreciation. The network said the two defense chiefs confirmed close cooperation and the sharing of information. In addition, the network said they agreed that North Korea’s ballistic missile launches pose a “grave threat to regional security” and the UNSC resolutions must be fully implemented to completely and irreversibly abolish its ballistic missiles of all ranges.