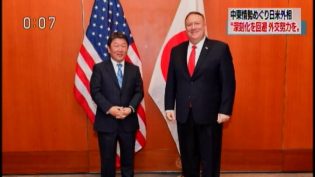 All networks reported on a meeting between Secretary of State Pompeo and Foreign Minister Motegi in a San Francisco suburb on Tuesday. Concerning the Middle East, Motegi reportedly told the Secretary: “I am deeply concerned about the heightened tension. Japan is calling on all parties concerned to make diplomatic efforts to ease tensions and highly values the restrained response of the U.S.” The Secretary reportedly responded by saying: “We appreciate Japan’s efforts.” After the meeting, Motegi told reporters: “We had in-depth discussions on the situation in the Middle East. I will continue to make tenacious diplomatic efforts.” According to an NHK reporter, a GOJ source stressed that the bilateral meeting was significant as the Japanese side was able to directly urge the U.S. to exercise restraint at this juncture. The reporter added that when talking to the press after the meeting, Motegi showed consideration for Iran by using the phrase “exchange of views” instead of the phrase “to work closely,” which he frequently uses during meetings with U.S. interlocutors. Noting that both nations share a desire to avoid war, the reporter said Motegi is set to continue to call for diplomatic efforts to resolve issues.

All networks reported that prior to his meeting with the Secretary, Motegi attended a trilateral foreign ministerial meeting with the U.S. and the Republic of Korea, where they expressed support for the continued U.S.-DPRK talks toward North Korea’s complete denuclearization. According to NHK, they also agreed that relaxing the UNSC sanctions on North Korea would be premature and that their steady implementation is important. They also confirmed close trilateral cooperation.