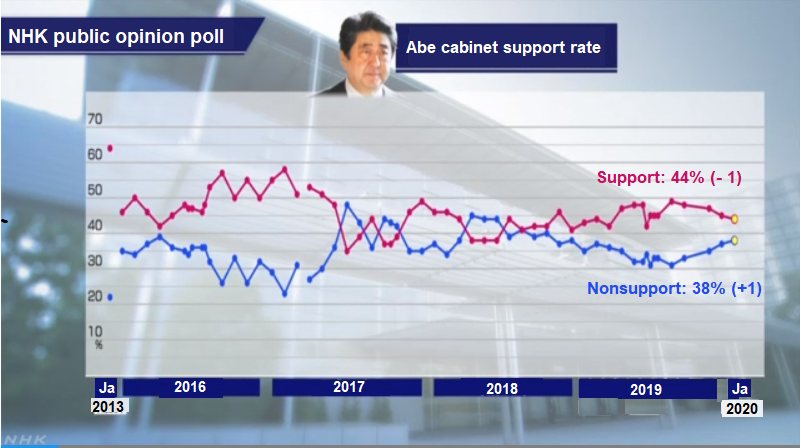 According to the NHK public opinion survey for January, 44% of pollees support the Abe cabinet, down 1 percentage point from the poll conducted last month. Those saying they do not support the cabinet increased by 1 point to 38%.

NHK conducted a nationwide survey over the three-day period of Jan. 11–13, 2020, on a computer-aided random digit dialing (RDD) basis and targeted men and women aged 18 or over with calls placed to landline and mobile phone numbers. Valid responses were received from 1,221 of the 2,216 people polled. The valid response rate was 55%.

Asked why they do not support the cabinet, 46% said, “Because the prime minister is untrustworthy” and 28% said, “Because nothing can be expected of its policy measures.”

Japan depends on the Middle East for the bulk of its crude oil. To strengthen its framework to collect the information needed to ensure the security of Japan-affiliated vessels, the government is set to dispatch Self-Defense Force assets to the Middle East. Asked for their views on the dispatch of the SDF, 45% of respondents said they are “in favor” of it and 38% said they are “opposed” to it.

Men and women viewed this matter differently. More men said they are in favor (56%) than said they are opposed. In contrast, women opposed (45%) exceeding those in favor.

A former Cabinet Office state minister in charge of developing integrated resorts (IRs) that feature casinos in Japan has been arrested on suspicion of accepting bribes. The government plans to continue to move forward with the development of IRs. The opposition parties, however, plan to submit to the Diet a bill to abolish the IR Implementation Act. Asked if the development of IRs should continue to be pursued or should be abolished, 25% said the project should move forward while 54% said it should be dropped.

By age group, more than half of those age 50 or over said that the plan should be cancelled. Of those, 70% of those in their 60s also gave that response.

Even among ruling party supporters, those saying the plan should be dropped (47%) exceeded the percentage saying it should move forward.

The poll probed views on the timing of the dissolution of the Lower House and the holding of a general election. Given four responses to choose from, 4% said “before the Tokyo Olympic and Paralympic Games,” 28% said “after the Games but before the end of the year” while 16% said “early next year” and 39% said “when the Lower House members’ terms expire in October next year or at a time near that.”