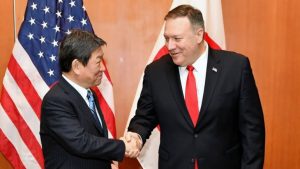 All national dailies ran extensive reports on a meeting between Secretary of State Pompeo and Foreign Minister Motegi in East Palo Alto, near San Francisco, on Tuesday and another meeting between Secretary of Defense Esper and Defense Minister Kono at the Pentagon on the same day. The papers wrote that Secretary Pompeo welcomed Japan’s efforts to ease the tensions in the Middle East and that Secretary Esper welcomed Japan’s dispatch of MSDF assets to the Middle East. 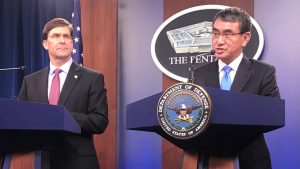 Yomiuri speculated that the simultaneous visits to the United States by Motegi and Kono were aimed at demonstrating to the international community the strong U.S.-Japan alliance in conjunction with the 60th anniversary of the signing of the U.S.-Japan Security Treaty on Jan. 19. The paper also speculated that Motegi will seek to meet with Secretary Pompeo again at an international conference to be held in Germany in February. The paper also conjectured that Tokyo is planning to explain to Washington at their coming Special Measures Agreement talks that Japan is bearing a fair share of the cost of hosting U.S. troops in response to a call within the U.S. government for Japan to boost its financial support. The paper wrote that Chief Cabinet Secretary Suga told reporters in Tokyo on Wednesday that close and in-depth consultations between their cabinet ministers were critically important for the United States and Japan in order to further strengthen their alliance.

Nikkei wrote that the United States and Japan reaffirmed their strong alliance through the meetings between their foreign policy and defense chiefs. The paper asserted that the bilateral alliance has become stronger partly on account of the friction between Washington and Beijing. The paper wrote that although the issue of Japan’s sharing the cost of hosting U.S. forces did not come up at the foreign and defense ministerial meetings on Tuesday, it could reemerge ahead of the U.S. presidential election in November.