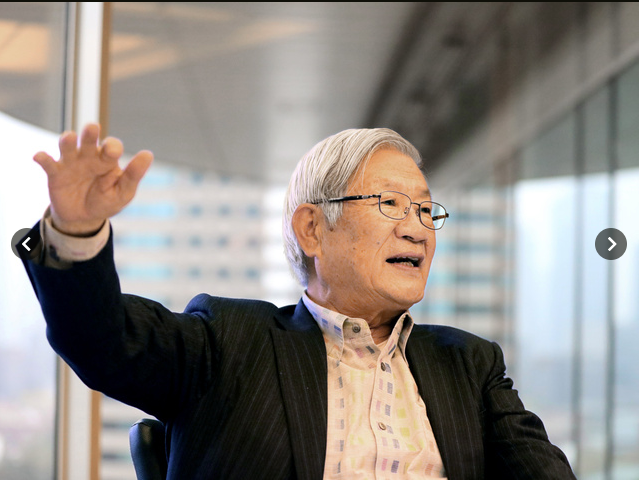 How has the Japan-U.S. alliance changed? What role does Japan have to play in the era of competition between the two superpowers of the U.S. and China? Former National Defense Academy President Makoto Iokibe, a political scientist well versed in the history of Japan’s foreign policy, says, “Japan should prompt the U.S. and China to rearrange the world order.”

[The following is an interview with Iokibe.]

Question: The U.S. is starting to turn its back on the world order it has been leading.

Makoto Iokibe: We’re surprised by the U.S.’s desire to withdraw from the world and turn inward. But historically, the starting point of the U.S. is isolationism. However, the U.S. learned from the two world wars in the 20th century that isolationism is costly. The country also learned that it is better to create and operate an ideal command system on its own than to clean up the mess after the world plunges into war.

But the U.S. was forced to shoulder a heavier burden when the time arrived for it to be responsible for the post-World War II order. That is why President Trump complains, “Why does the U.S. have to play the role of the world’s policeman?”

Q: What was the turning point for the U.S.?

Iokibe: One was that the U.S. made mistakes by waging the Vietnam War and the Iraq War. That exhausted the country and accelerated “fatigue from being responsible for the order.” Another was the widening gap between rich and poor. Neoliberalism, which brought prosperity in the 1980s, tolerated disparity. But disparity expanded when Lehman Brothers went bankrupt in 2008, leading to the collapse of the middle class. That left the country’s economy on the verge of collapse and it was entrusted to President Trump. That is the U.S. we’re seeing now.

Q: How has the character of the Japan-U.S. Security Treaty changed since the end of World War II?

Iokibe: Japan, which was defeated in the war, wanted to recreate itself as an economic power after the war. But the country was far from having the capability to fully defend itself from the Soviet Union. Therefore, Japan had no choice but to shelter under the U.S.’s security umbrella. Meanwhile, the U.S. could significantly benefit from freely using bases across the Pacific as the infrastructure for the post-war order. The Japan-U.S. Security Treaty provided benefits to both countries, even though it was different from an “offensive and defensive alliance” designed to jointly fight against a common enemy.

In the late Cold War era, the Japan-U.S. Security Treaty took on a greater significance as a stabilizer for the regional order in the Asia Pacific. Some people argued that the treaty was no longer necessary after the collapse of the Soviet Union. But there were destabilizing factors, such as the North Korean nuclear issue. The treaty continues to function as a “stabilizer” today.

Q: President Trump is complaining that the Japan-U.S. Security Treaty is “unfair.”

Iokibe: He seems to be saying that Japan is always defended by the U.S. and the U.S. can’t benefit from the alliance or that he will pull out U.S. forces unless Tokyo pays the full cost of stationing them in Japan. But questions have been raised as to whether the U.S. can overlook China and Russia doing whatever they want. The U.S.’s interests spread across the world and its involvement in the world and in maintaining order is necessary for those national interests. Bases in Japan are one of the most important infrastructure assets to achieve that goal. It is not true that the alliance is just for Japan and is nothing more than a burden on the U.S.

The Japan-U.S. alliance supports different needs of the two countries and contributes to the shared interest of stabilizing the Asia-Pacific region.

Japan should be a peace-oriented nation that does not benefit from war and does not trigger an arms race. Even so, it is important to let other nations know that Japan possesses capabilities that should not be underestimated.

Q: How do you see the rise of China?

Iokibe: China, which has gained economic strength by adopting a policy of reform and opening-up, is reinforcing its military strength so that both strengths can work together. China’s defense spending has exploded over the past 25 years. The question is what China would do will with both economic and military power. China is tenaciously gaining momentum while the U.S. and the U.K. are being convulsed.

Q: It is unclear what kind of “superpower image” China is seeking.

Iokibe: The Beijing Olympic and Paralympic Games were a huge success. In addition, the country supported the global economy to prevent it from declining by making large financial investments when the economies in the US, Europe, and Japan suffered a huge blow from the collapse of Lehman Brothers. This made China overconfident. The Chinese leaderships thought,  “We’ll lead the world because the age of the U.S. global dominance is over” and began to believe that the time arrived to depart from Deng Xiaoping’s teaching of taoguang yanghui — “Hide your capabilities and bide your time.”

China has two histories. One is the era when it behaved as a suzerain for about 2,000 years and the other is the humiliating post-Sino-Japanese War era that lasted for 100 years. China has now returned to the former era and is insisting that the Senkaku Islands and the South China Sea–that “everything belongs to China.”

It is hard to say that China’s approach has been successful. China has been forced to change its behavior because not only the U.S., which had been observing China’s growth, has shifted to a hardline policy toward China but also because China suffered a crushing defeat in the ruling by the International Court of Arbitration on its claims to the South China Sea.

Q: What role should Japan play amid the competition between Washington and Beijing?

Iokibe: Japan should tell China that its tough stance on the South China Sea and the Senkaku Islands persuades no one in the international community of its claims. Prime Minister Shinzo Abe should take advantage of the current good Sino-Japan relationship to persuade Chinese leader Xi Jinping that the greatness of China as a superpower will be tested by how it handles the Hong Kong issue.

At the same time, Japan needs to persuade the U.S. The U.S. should neither return to isolationism nor show blatant hostility toward China. It is also Japan’s responsibility to let the U.S. learn that it should work on rearranging the global order with other countries.

Q: How do you think a balance can be achieved?

Japan should call on China to consider the concept of a regional order together while possessing “an unimpeachable ability to refuse” backed by military strength and maintaining friendly bilateral ties. It is important for Japan to say what it has to say while respecting its relations with China. Japan has to find ways for China to be respected in the world and encourage the country to think together about the new order that includes China while modifying China’s attitude without its becoming isolated. (Slightly abridged)