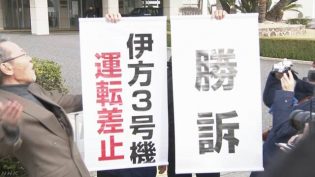 NHK reported this afternoon that the Hiroshima High Court revoked a lower court decision today and ordered Shikoku Electric Power to suspend the No. 3 reactor of Ikata Nuclear Power Plant in Ehime Prefecture. The network said that while the reactor has been offline for regular inspections, the reactor will likely remain offline even after April when the inspections end. According to the network, this is the second suspension of the reactor due to a judicial decision.

The network reported that three residents of an island in Yamaguchi Prefecture, which is close to the plant, appealed the lower court decision last March that rejected their request for an injunction. In December 2017, the Hiroshima High Court ordered the operator to shut down the No.3 reactor at the request of a different group of residents. But the next year, another judge at the same court revoked the injunction, and the reactor was put back online in October 2018.