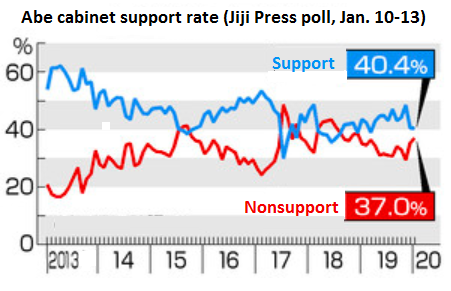 The disapproval rate rose 1.7 points to 37.0 pct, according to the nationwide survey, which was conducted by face-to-face interviews for four days through Monday.

Support for the cabinet was affected only to a limited extent by the arrest of House of Representatives member Tsukasa Akimoto in a casino resort-linked bribery case in December as well as the revelation of a breach of law by the government over the handling of guest lists for government-funded annual cherry blossom-viewing parties hosted by Abe.

Respondents who said they were not persuaded by Abe’s explanations accounted for 81.0 pct among supporters of Komeito, the LDP’s coalition partner, and 67.6 pct among LDP supporters, the survey showed.

On reasons for supporting the cabinet, with more than one answer allowed, 22.3 pct said there is no other suitable person for prime minister, 10.3 pct said Abe has leadership skills and 6.1 pct said they trust him.

Support for the LDP was up 1.9 points at 24.9 pct while backing for the major opposition Constitutional Democratic Party of Japan fell 0.5 point to 3.3 pct.

The support rate stood at 0.5 pct for Reiwa Shinsengumi and at 0.2 pct for NHK kara Kokumin wo Mamoru To (the party to protect the people from NHK, or Japan Broadcasting Corp.).

The share of people who do not support any political party stood at 60.4 pct.

The survey was conducted with 2,000 people aged 18 or older. Valid responses were given by 62.0 pct.