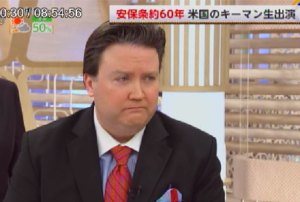 Fuji TV’s Sunday morning program “Nichiyo Hodo – The Prime” aired a 15-minute report on the 60th anniversary of the signing of the U.S.-Japan Security Treaty. DAS Knapper appeared live on the show and stressed that the U.S.-Japan Alliance is the cornerstone of peace, security, and prosperity in the region and that it has been successful because the United States and Japan have shared interests and values. He also said the Alliance has made progress facing new challenges, even beyond Asia, and expressed appreciation for the deployment of MSDF assets to the Middle East. When asked whether the U.S. is planning to ask Japan to pay more to host the U.S. Forces Japan, DAS Knapper said bilateral negotiations will begin soon. In response to a question on whether the U.S. is planning to deploy intermediate-range missiles in Japan, DAS Knapper said there is no such plan as of now. He also reiterated the U.S. position that the Senkakus fall within the scope of Article 5 of the Security Treaty, and stressed that trilateral cooperation between the U.S., Japan, and ROK is important for peace and stability in the region. On North Korea, DAS Knapper said the door to diplomacy remains open, but stressed that the U.S. will work closely with Japan to continue the pressure campaign and mentioned that President Trump is concerned about the abduction issue.

Commentator Yoshiko Sakurai said after the interview that it gave her the sense that the U.S. and Japan truly have shared interests not only in the Korean Peninsula but also in Asia as a whole.  She said Japan has been relying heavily on the U.S. under the Security Treaty, but stressed that Japan should make more active contributions without relying solely on the United States. LDP lawmaker Masahisa Sato said: “China will become the major target under the U.S.-Japan Security Treaty from now on. It is extremely important to maintain a posture under which the combined military power of the U.S. and Japan exceed that of China.”