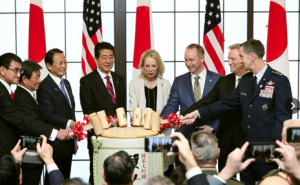 The Monday editions of Nikkei, Yomiuri, Sankei, and Mainichi gave front- or inside-page coverage to a speech delivered by Prime Minister Abe at a reception to commemorate the 60th anniversary of the signing of the U.S.-Japan Security Treaty held at MOFA’s Iikura Guest House in Tokyo on Sunday. Abe reportedly stressed that the treaty is “a pillar that is indestructible, a pillar immovable, safeguarding peace in Asia, the Indo-Pacific, and in the world, while assuring prosperity therein,” and introduced an episode in which President Eisenhower told Prime Minister Kishi during the signing ceremony that the treaty was “indestructible.” Abe expressed his commitment to strengthening the Alliance by saying: “Going forward, it is incumbent upon us to make the Alliance more robust, to make it a pillar for safeguarding peace and security in both outer space and cyberspace.” Mainichi wrote that approximately 250 people from the U.S. and Japan attended the reception, including Chargé d’Affaires Young and USFJ Commander Schneider from the U.S. side and PM Abe, Deputy Prime Minister Aso, Foreign Minister Motegi, and Defense Minister Kono from the Japanese side. According to the papers, Mary Eisenhower, a grandchild of President Eisenhower, also took part in the reception.

The papers also wrote that President Trump released a statement on the anniversary in which he said “it is essential that our Alliance further strengthen and deepen” amid the increasingly severe security environment. Yomiuri and Sankei claimed that the President hinted that U.S. allies should pay their fair share of the security costs by saying: “I am confident that in the months and years ahead, Japan’s contributions to our mutual security will continue to grow, and the Alliance will continue to thrive.”

The Saturday morning editions of all national dailies reported that Secretary of State Pompeo, Secretary of Defense Esper, FM Motegi, and DM Kono released a joint statement on Friday ahead of the 60th anniversary. Asahi wrote that the joint statement described the Alliance as “rooted in our unwavering commitment to values such as democracy, respect for human rights, and a rules-based international order” and recognized that “our Alliance has played and will continue to play an integral role in ensuring the peace and security of our two countries, while realizing our shared vision of a free and open Indo-Pacific.” The joint statement concluded by saying: “We reiterate our unshakeable commitment to strengthen the Alliance and to uphold our common values and principles towards the future.”