Trump hopes Japan to do more for security alliance 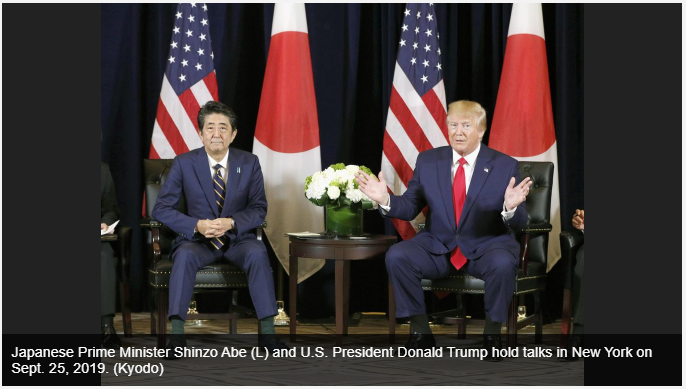 WASHINGTON — President Donald Trump on Saturday expressed hope that Japan will contribute more to its alliance with the United States as he issued a statement on the occasion of the 60th anniversary of the signing of the two countries’ security treaty.

“As the security environment continues to evolve and new challenges arise, it is essential that our alliance further strengthen and deepen,” Trump said. “I am confident that in the months and years ahead, Japan’s contributions to our mutual security will continue to grow, and the alliance will continue to thrive.”

Trump has been calling on Japan to pay a larger proportion of the cost of stationing U.S. troops in the Asian country, while being critical of what he perceives as the one-sided nature of the security treaty. The alliance obliges the United States to come to the defense of Japan in the event of an attack but does not require Japan to help defend the United States against aggression.

The Japanese government has maintained that the alliance benefits both countries. The treaty, under which around 54,000 U.S. troops are stationed in Japan, enables the United States to respond rapidly to contingencies in the Asia-Pacific region, including North Korea.

Trump said in the statement that the alliance is “rock-solid” and acknowledged that it has been “essential to peace, security, and prosperity” for both countries and the region over the past six decades.