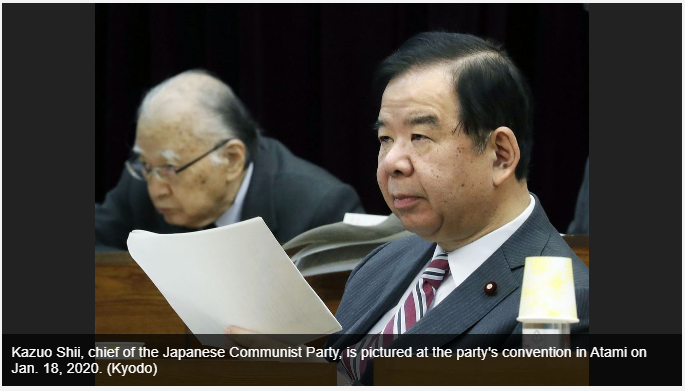 ATAMI, Japan — The Japanese Communist Party criticized China’s current leadership in its first revision of its platform since 2004 adopted Saturday, saying Beijing’s quest for “great-power chauvinism and hegemonism” is problematic.

“The Chinese leadership’s mistake is extremely serious. That action does not deserve the name of the Communist Party,” Kazuo Shii, chief of the Japanese opposition party, said at its convention, held for the first time in three years, with Beijing’s expansionary activities in the East and South China seas in mind.

Before the five-day party congress concluded in Atami, Shizuoka Prefecture, the JCP also selected executive members and unanimously adopted a resolution pledging to cooperate with other opposition parties to pave the way for a change of government.

Shii and Akira Koike, second-in-command of the party, retained their posts. Tetsuzo Fuwa, a former JCP leader, remained as a member of the Standing Executive Committee.

Koike, the JCP’s secretariat head, urged that Prime Minister Shinzo Abe’s government, “the worst in postwar” Japanese politics, be brought down by making a success of its cooperation with citizens and opposition parties.

For the party’s Program, the JCP for the first time included its pledge to create a Japan free from nuclear power plants and realize a gender equal society.

But the JCP maintained its goal of abrogating Japan’s long-standing security treaty with the United States and dissolving the Self-Defense Forces.