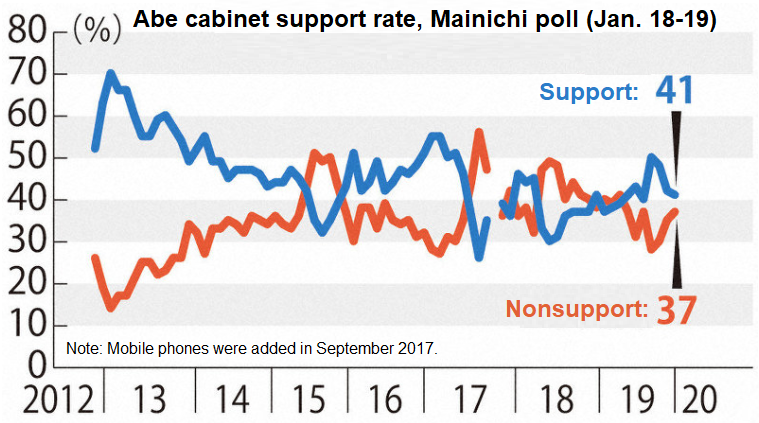 TOKYO — More than 60% of people surveyed in a recent Mainichi Shimbun opinion poll want Japan to reconsider its “integrated” casino resort project amid a bribery scandal resulting in the arrest of a Japanese lawmaker and executives of a Chinese firm, which is suspected of trying to buy off legislators to win favorable treatment over the project.

Of the respondents, 63% said the plans for the casino project should be re-examined and the project as a whole should be reconsidered, far larger than the 22% who supported the project as currently planned. Even among pollees who support the Cabinet of Prime Minister Shinzo Abe, a majority said the proposal needs to be reconsidered, while 83% of those who do not support the Abe Cabinet said the government should review the plan.

When asked about the controversial cherry blossom-viewing party hosted by Prime Minister Abe, 45% said legislators should continue discussions over the issue in the regular Diet session convened on Jan. 20, while 44% answered that wasn’t necessary.

Regarding the issues surrounding the annual party, opposition forces have been critical of Abe, accusing him of using the event funded by taxpayers for his personal gain. Furthermore, they are set to grill the Abe administration over mismanagement of public documents relating to the party, such as discarding guest lists without following government guidelines.

While 66% of supporters of Abe’s Liberal Democratic Party (LDP) said discussions on the cherry blossom party were “unnecessary” and only 25% wanted continued deliberations on the issue, 54% of independents responded that the discussions should continue.

Meanwhile, 41% of pollees said they approved the Abe Cabinet, while 37% said they didn’t. The figures remained the same level as the previous survey carried out on Nov. 30 and Dec. 1, 2019. In the latest poll, 21% said they were “not interested” in the Abe Cabinet.

Support rates for key political parties in the latest survey are as follows: 34% for the ruling LDP, 8% for the largest opposition Constitutional Democratic Party of Japan, 3% for the conservative opposition Nippon Ishin (Japan Innovation Party) and 2% each for the Japanese Communist Party, the LDP’s junior coalition partner Komeito and the Democratic Party for the People. Those who said they did not support any political party accounted for 40% of the respondents.