Commentary: The Japan-U.S. alliance is stronger than ever, but that doesn’t mean it’s on autopilot 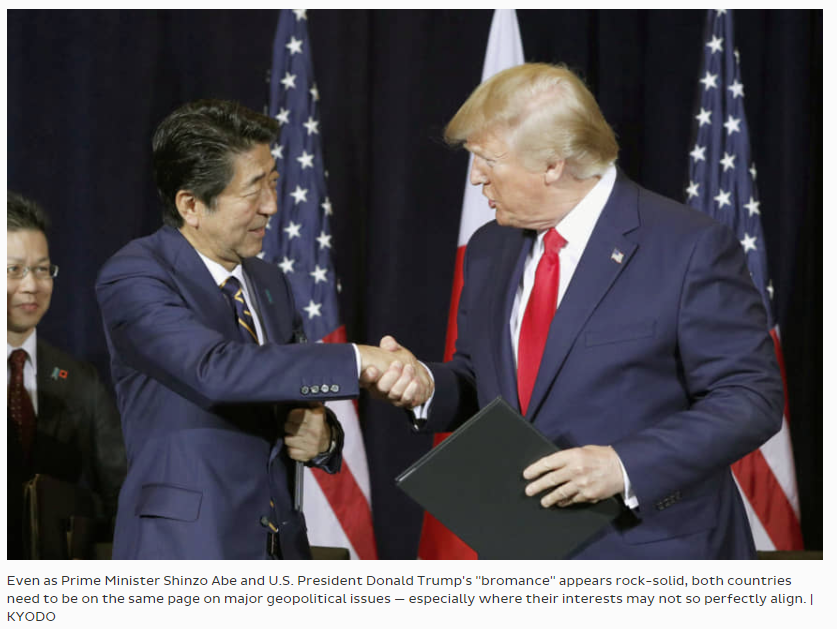 WASHINGTON – When the Japan-U.S. security treaty was revised 60 years ago, nobody expected that it would become one of the most remarkable security alliances in history.

The treaty, which is the centerpiece of the two nations’ alliance, has continuously provided a strong security architecture to protect the strategic interests — stability, peace and prosperity — of the two countries for more than half a century.

The alliance evolved organically over the years and adapted to the geopolitical challenges of the times thanks to the stewardship of alliance managers in both countries. What was largely an alliance designed to guard against communism during the Cold War has now evolved into a regional and global security infrastructure that covers new domains like cyber and space.

As Defense Minister Taro Kono said in Washington last week, the U.S.-Japan alliance is stronger than ever.

Yet that does not mean the security relationship can run on autopilot, and it is not just because of U.S. President Donald Trump’s ungrounded criticism of Japan as a “free rider” of security.

Ryozo Kato, during his time as Japanese ambassador in Washington, often remarked that the relationship between Japan and the U.S. was like “gardening.” It is one of the most beautiful gardens in the world for everybody to enjoy, but the garden requires constant, thoughtful and skillful care with a grand plan in mind. The same could be said of the security treaty, which deserves the best care possible.

Being on the same page

As we face a new set of challenges in the age of great geopolitical shift, the anniversary also presents a timely and much-needed opportunity for both countries to calibrate the alliance’s future. As it has been skillfully done in the past by statesmen from both countries, the Japan-U.S. security cooperation needs to continue to evolve in order to adapt to the ever-changing environment.

Here are some of the major issues the U.S. and Japan would do well to address together:

Even as Prime Minister Shinzo Abe and Trump’s “bromance” appears rock-solid, both countries need to be on the same page regarding major geopolitical issues, especially where the interests may not perfectly align in reality.

Indeed, there was a time when Tokyo and Washington saw security threats differently.

While the Japanese public has perceived China as a major security concern since the late 1990s, the U.S. saw China more as an economic opportunity rather than a security challenge, until that perception began to change in the latter years of the administration of President Barack Obama.

China, which Kono last week in Washington essentially described as a threat, is one — if not the biggest — issue.

Japan is literally on China’s doorstep and as such finds itself exposed to direct threats on an almost daily basis when Chinese vessels make incursions into Japanese territorial waters. The U.S. is not in the same position. North Korea presents similar challenges in that it is geographically right next to Japan and also poses constant direct threats by medium-range missiles, whereas the U.S. is not.

Iran is where the U.S. and Japan have clearly different strategic goals in terms of energy supply.

The U.S. and Japan must have detailed coordination to align themselves squarely on these difficult issues to ensure the soundness and efficacy of the bilateral alliance.

It has become a common refrain that the U.S. and Japan share common liberal-democratic values such as democracy, freedom and rule of law.

They have been core principles of the alliance, in addition to shared security interests, but the two countries can do more.

These values can help bridge the possible gaps mentioned above. Emphasizing these values also help the alliance to more closely align with like-minded countries in the region.

They are central to the concept of Indo-Pacific strategy, which the U.S. and Japan share, especially as the Asia-Pacific region does not have a multilateral security structure like Europe does in the form of NATO. In short, the more partners there are, the stronger the ability to work with them and check potential adversaries.

But these values can’t just be preached. In order to have credibility, they need to be practiced. It has become a common narrative in the global community that the Trump administration is eroding these values.

That perception could hurt the credibility and unity of the free and open Indo-Pacific strategy. Japan, as an ally, is positioned to step up to the plate to demonstrate that these values remain robust and continue to be the binding principles of the free world.

The U.S. and Japan should consider how to make the bilateral security alliance stronger.

Currently, the two nations do not have a combined operation command which can be jolted into action when the alliance faces immediate threats, so the two allies need to begin discussing how to structure a combined operation command to fit the bilateral goals. This will naturally involve defining the roles, missions and capabilities of each partner.

It is the only way, in the long run, to ensure interoperability, sustainability and combat readiness between the self-defense forces and the U.S. forces effectively demonstrating deterrence capability.

The effort to come up with a combined operation command should have new areas of competitive domains, such as cyber and space. It should also address asymmetrical threats by nonstate actors and paramilitary groups.

There needs to be an honest conversation about how to maintain robust defense industrial capability, including technology development, in Japan.

Recently, foreign military sales with black boxes have been rising faster than the Japanese government and industry expected.

Maintenance of Japan’s defense industrial capability and actual participation in industrial work is crucial for Japan’s sovereign defense strategy. It should be thoughtfully discussed between the two allies with the mid- to long-term future of the alliance in mind. The current debate about F-3 next-generation stealth fighters is an enormous challenge as well as an opportunity in this respect.

U.S. and Japanese officials should work hard to gain domestic support for the security alliance in their respective countries. In the U.S., criticism of the allies as “free-riders” at the cost of the U.S. has become a point of argument in domestic political discourse there. In Japan, there is an entrenched opposition to the alliance with the U.S. and general aversion to increase the role of the self-defense forces, particularly from the opposition at the Diet.

Furthermore, both countries are wary of being entrapped in the partner’s war. It is crucially important for the two democracies to convince voters of the strategic values of the bilateral alliance for their own benefit. The formal negotiation of host-nation support in Japan, which will begin next year, is a key subject matter in this respect.

The Japan-U.S. security treaty has been the cornerstone of Asia’s regional security architecture, ensuring stability and prosperity for the better part of the postwar period.

As the treaty enters its seventh decade, the alliance is more important than ever as the region is in the midst of the great power competition over rules and norms of international order regarding diplomacy, economy and defense.

The stakes are very high — it is about protecting and maintaining our way of living.

Satohiro Akimoto is an associate fellow at the International Institute for Strategic Studies (IISS).