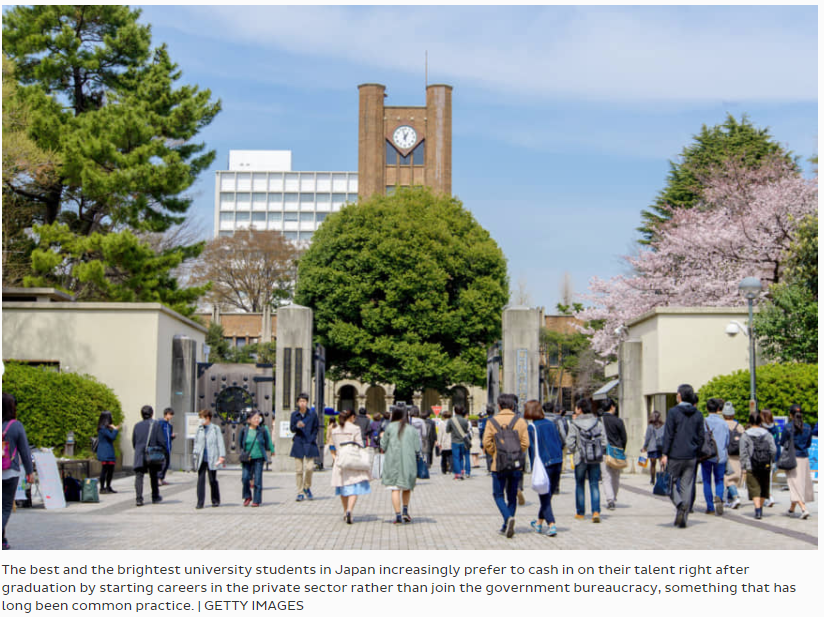 I have been in the think tank business for more than a decade. My objective in joining the Canon Institute for Global Studies (CIGS), a Tokyo-based think tank founded in 2009, was to train and send ambitious and competent young men and women to the government’s decision-making body as political appointees.

The idea of introducing a political appointment system in Japan was conceived before I left government service in 2005. It was becoming ominously clear as early as 20 years ago that “the best and brightest” of fresh university graduates had found a new social contract and would no longer continue to join the government bureaucracy.

It was easily predictable back then that sooner or later the day would come when the bureaucracy would no longer function as well as before. The best and the brightest university students would now start cashing in on their talent right after graduation — becoming lawyers, joining foreign consulting firms or starting up their own businesses.

That’s why think tanks in this country need to train and send competent men and women to work for the government. Unfortunately, it is not easy because many think tanks in Japan are either less independent, too small or do not know how to send their researchers into the bureaucracy.

Most of Japan’s major think tanks are either government-affiliated research institutes or subsidiaries of megabanks, huge financial institutions, global trading firms and other big private corporations. Many executives in these think tanks have recently retired from such their “mother” organizations.

Those think tanks tend to conduct research activities assigned by or in accordance with the government or its affiliates for implementing government policies. They seldom issue policy recommendations or action proposals that are truly effective and independent of the government.

Many think tanks lack the merit of scale. There are independent think tanks existing in Japan that consider their functions quite different from the government or big corporations. This is very good. However, their performance is not always as stellar as they hope.

Unfortunately, many of those think tanks, mostly represented by a specific star individual or a small group of competent researchers, are not always financially affluent enough to be independent. Despite their competence in specific areas of expertise, their impact on the decision-making process is limited.

Yet another problem is the lack of “revolving doors” in Tokyo. Whether we like it or not, the biggest and most effective think tanks in Japan have always been the government bureaucracies, mainly because the bureaucrats in each governmental ministry or agency virtually monopolize relevant classified information.

Without access to such classified material in Japan, the system of political appointment with the revolving doors does not function in the way observed in the United States or some European countries. Bureaucracies in Japan, therefore, tend to be less interested in, if not completely ignoring, policy recommendations by private think tanks.

CIGS was established in 2009 to overcome such difficulties surrounding Japanese think tanks. Although solely financed by Canon, Inc., unlike other similar think tanks in Japan CIGS has enjoyed full independence in terms of substance and the chain of command. Over the past decade, it has proposed various policy recommendations mainly in the fields of its three pillars, macro-economics, global issues and foreign policy/national security affairs.

Particularly in the last few years, CIGS has reinforced its artificial intelligence and big data workshop to collaborate internally with its fellow researchers.

It is unfortunate that the roles think tanks in Japan have played so far are quite limited. It is important for Japanese think tanks to encourage policymakers to change their interactions with think tanks and the bureaucracy so that think tanks can play the kind of constructive roles in decision-making that they deserve.

Looking back on the history of think tanks in Japan, most of them were established after 1960 and are still relatively young. Japan’s socio-political environment surrounding such institutions has been quite different in many ways from their counterparts in other Western nations.

What is now required from think tanks in Japan is not only full independence from the government. They should be able to spontaneously make proposals for policies that the people of this country need. They must be involved in the decision-making process by sending competent political appointees to the government. Think tanks in Japan should also be able to share, through the revolving doors, the wisdom, expertise and experience that their political appointees have acquired in the government with the non-government sectors. To diversify think tanks’ financial resources, changes in tax systems for public contributions may be required.

When all is said and done, think tanks in Japan must travel a long and winding road. Despite the cruel interventions of politicians, the bureaucracy in Japan will remain strong for at least the near future. The bureaucrats will also try their best to protect their vested interests in the decision-making process by refusing to accept political appointees in the government.

This battle will go on, but the final victors will probably be the think tanks.

Kuni Miyake is president of the Foreign Policy Institute and research director at Canon Institute for Global Studies.