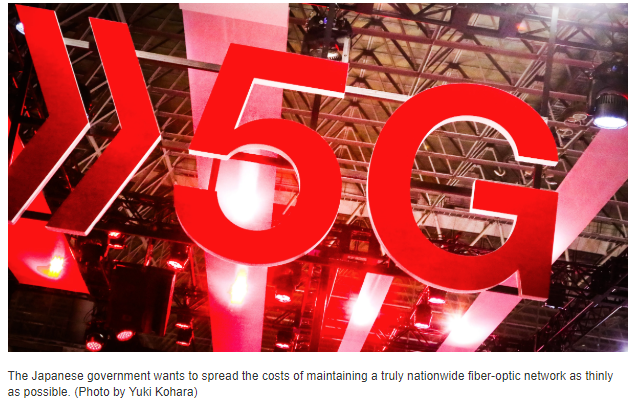 TOKYO — Japan’s communications ministry will introduce a system in which everyone in the country who uses the internet will be charged a small fee, with proceeds going to maintain the fiber-optic infrastructure needed for the next-generation 5G mobile standard.

The Ministry of Internal Affairs and Communications aims to make high-speed internet connections available everywhere in the country, including in the most rural communities. The fees are meant to spread the costs of maintaining this wide net to all internet users.

They will be used to subsidize repair and other costs of network operators that have fiber-optic infrastructure in unprofitable regions.

Mobile carriers and other optical fiber-equipped internet service providers will be responsible for collecting the monthly fee, expected to be several yen (several cents) per subscription.

Japan has about 700,000 households that do not have access to fiber-optic service. The government is encouraging carriers to build out their networks to these regions and expects to reduce the number to 180,000 households by the end of March 2024.

The fees could kick in as early as that year, when the laying of fiber-optic cables is generally completed and carriers shift to maintaining from building out their networks.

In the fiscal 2020 tax revision, worked out last month, the government introduced a corporate tax break for large mobile carriers that speed up installations of 5G base stations. It aims to use the tax break to encourage fast 5G development, and the user fees to support the long-term maintenance of fiber-optic networks.