Editorial: Japan-U.S. security alliance must be bedrock of shared values 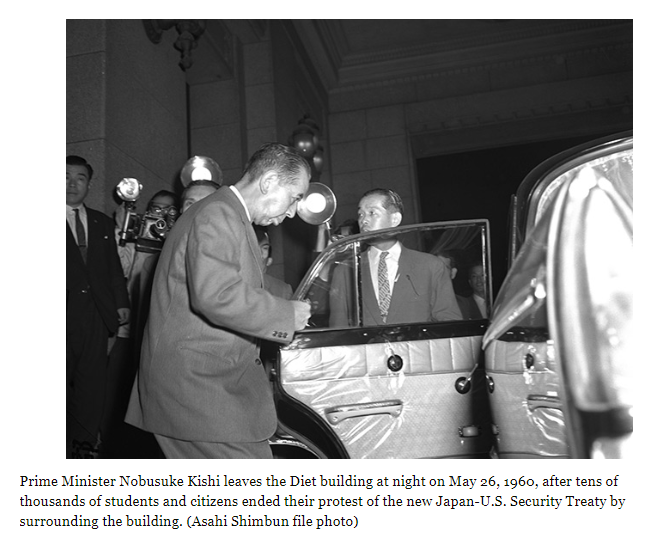 On Jan. 19, 1960, Japan and the United States signed their current bilateral security treaty, a revised version of the original, one-sided treaty.

The revised treaty simply stipulated that Tokyo gave Washington the right to “dispose United States land, air and sea forces in and about Japan” to “contribute to the maintenance of international peace and security in the Far East and to the security of Japan.”

The revision to the bilateral security treaty under the initiative of then Prime Minister Nobusuke Kishi has obligated the United States to defend Japan.

Since then, the treaty has been the linchpin of Japan’s foreign and security policies.

It is also to be remembered that the revised treaty was rammed through the Diet in Japan amid a massive wave of strong protests called “ampo toso” (the struggle over the security treaty).

In Japan, the bilateral security treaty is superior to the Constitution. This is a phrase that has been repeated again and again in Okinawa Prefecture, which has been bearing the unfairly heavy burden of hosting many U.S. military bases for decades. It speaks volumes about the grim reality that the values the security treaty is supposed to protect have been trampled on under the pretext of maintaining the treaty.

In its preamble, the Japan-U.S. Security Treaty says the two countries desire to “uphold the principles of democracy, individual liberty, and the rule of law.” Prompting these universal values while contributing to the formation of the world order based on international norms is the way for Japan to follow. The bilateral security treaty should be helpful for this national credo.

And now, U.S. President Donald Trump’s “America First” agenda, underpinned by myopic views and policies, is posing new security risks. Japan is facing the unprecedented challenge of figuring out a new strategy for its relationship with the United States, which has changed from the guardian of the world order to a disruptive factor.

In considering the future of Japan’s relationship with the United States, there are things we need to keep in mind.

First, the bilateral security alliance should not be allowed to serve as a framework for confrontation with any other countries. The battle for global hegemony between two superpowers, the United States and China, will continue in the coming decades. But Japan, one of China’s neighbors, should urge the two nations to seek a peaceful coexistence.

Secondly, Tokyo should not act as a mere proxy for Washington. Japan should think on its own what is good and bad for the region and the world and, when necessary, call on the United States to do better.

Thirdly, public understanding and support are vital for the health and strength of the bilateral security alliance. The U.S.-Japan Status of Forces Agreement (SOFA), which was signed along with the security treaty and grants the U.S. forces in Japan a broad range of privileges, threatens the livelihoods and rights of people not just in Okinawa but also in many other parts of Japan.

This situation must be rectified as soon as possible.

Given the threatening security landscape surrounding Japan, marked by China’s military buildup and North Korea’s reckless arms programs, the security treaty between Japan and the United States will remain as important as ever in the coming years.

That makes it all the more important for Japan to make greater efforts to help build a stable international order instead of simply following the U.S. lead.

This is the time for Japan to demonstrate its diplomatic wisdom and prowess based on its experiences during the six decades of its security alliance with the United States.