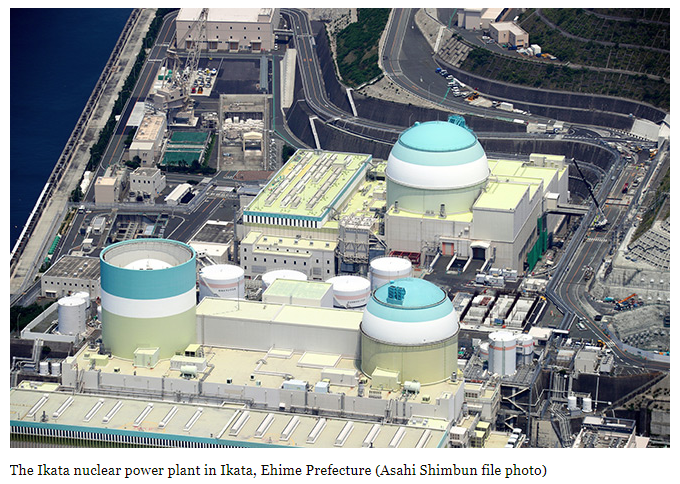 The Hiroshima High Court’s decision to order a halt to operations of the No. 3 reactor at the Ikata nuclear power plant in Ehime Prefecture is a warning against optimism concerning potential nuclear safety risks.

In issuing an injunction to stop the operations of the reactor, the court said Shikoku Electric Power Co. has not taken proper measures to secure the safety of the reactor given the possibility of an active fault running close to the nuclear plant it operates. The ruling also argued that the company’s assumptions concerning the risks related to a possible volcano eruption are overly optimistic.

The high court decision has cast serious doubt about the nuclear safety measures that have been taken by electric utilities to bring offline reactors back on stream under the new standards introduced after the 2011 Fukushima nuclear disaster. It has also called into question the Nuclear Regulation Authority’s decisions to allow utilities to restart suspended reactor operations by endorsing the legitimacy of the measures.

The injunction bans the resumption of the Ikata No. 3 unit’s operations unless the utility’s objection to the injunction is admitted.

Three residents in Yamaguchi Prefecture living on an island in the Seto Inland Sea within a roughly 50-kilometer radius of the plant had filed a request for a temporary injunction, but the Iwakuni branch of the Yamaguchi District Court rejected it in March 2019. The plaintiffs then appealed the decision to the Hiroshima High Court.

Here’s an outline of the case.

The Ikata nuclear plant is located at the root of the Sadamisaki Peninsula, a long and narrow strip of land at the northwestern tip of Shikoku Island, which is covered by the town of Ikata.

As Shikoku Electric’s “meticulous sonic wave tests could not confirm the existence of active faults near the Ikata plant,” the company took safety measures based on this assumption.

The NRA endorsed the legitimacy of the measures. But the high court took exception and said there is no ruling out the possibility that an active fault linked to the median tectonic line–Japan’s longest fault system–may exist near the nuclear plant.

The court adjudged that the measures taken by the utility do not meet the safety standards because the company has not properly evaluated the reactor’s quake resistance based on the assumption that there is an active fault running near the plant.

With regard to potential safety risks linked to a volcanic eruption, the main issue was how to assess the consequences of a possible eruption of Mount Aso in Kumamoto Prefecture according to the “guidelines for assessing the impacts of a volcanic eruption,” which are internal rules for the new safety standards.

As for the possibility of a catastrophic eruption of the volcano like the one that occurred several tens of thousands of years ago, the high court said it does not have to be considered because no safety measures are taken against this risk in areas other than nuclear safety, which it said means society basically ignores this possibility.

But the high court considered risks posed by the maximum-scale eruption that can be realistically assumed to be possible and pointed out that the utility’s risk estimates concerning such factors as volcanic ash are several times less than the projections for such an event. With this argument, the court acknowledged the insufficiency of the safety measures taken by the company and the unreasonableness of the NRA’s decision to endorse them.

Shikoku Electric plans to appeal the ruling. The NRA has also criticized the ruling, saying that the new safety standards are based on the latest scientific and technological knowledge and that it properly examines and assesses the measures taken by utilities.

But the high court’s decision should not be brushed aside.

The new nuclear safety standards were designed and introduced to ensure high levels of safety that can prevent a recurrence of a Fukushima-class accident.

In cases where experts are divided over safety risk issues, the court said, an optimistic stance toward the risks should not be taken casually simply because it is the majority view.

According to this position, the court declared Shikoku Electric’s sonic wave tests to be “insufficient” despite the fact that experts were divided on this issue.

Pointing to a flaw in the guidelines for assessing risks linked to volcanic eruptions, the court said it is “unreasonable” to assume that it is possible to predict the timing and scale of a major eruption sufficiently in advance.

This is a problem that was also pointed out in a court ruling handed down in the autumn of 2018. How long do nuclear regulators intend to leave it unaddressed?

In considering issues concerning nuclear safety, it is vital to listen humbly to dissenting opinions and remain willing to make constant reviews of the safety standards and the measures based on them.

A lack of such a commitment to safety undermines the credibility of the NRA’s claim that both the safety standards and screenings are totally reliable.