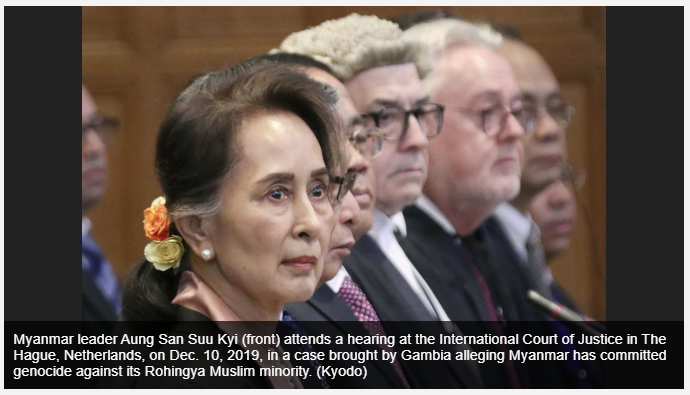 The Independent Commission of Enquiry, however, ruled out “genocidal intent” on grounds that no evidence has surfaced of any “intent to destroy” an entire race or religious group.

The announcement came a few days ahead of a scheduled ruling by the International Court of Justice in The Hague on Thursday on a case accusing Myanmar of violating the 1948 Genocide Convention.

More than 740,000 members of the minority group have fled from Rakhine State in western Myanmar to neighboring Bangladesh since August 2017 to escape a military crackdown on insurgents.

The four-member commission, comprising two foreign experts and two from Myanmar, said the crimes were committed by “multiple actors” including “members of Myanmar’s security forces” between Aug. 25 and Sept. 5, 2017 amid the response to earlier attacks on government posts by Rohingya insurgents.

“The killing of innocent villagers and destruction of their homes were committed by some members of the Myanmar’s security forces through disproportionate use of force during the internal armed conflict,” it said.

However, it said there is no evidence to suggest these killings or acts of displacement were part of a scheme to destroy the Muslim community in Rakhine.

This is the first time an investigative mechanism set up by the Myanmar government itself has concluded that the country’s security forces had committed serious crimes broadly in the state.

International organizations, including a U.N. independent fact-finding mission, have already released a series of reports on organized, systemic and violent eviction of the Rohingya by the military and other security forces.

They formally submitted their report to the government on Monday morning in capital Naypyitaw.

It is unclear whether the full content of the report will be made available to public.

When Suu Kyi appeared before the International Court of Justice on Dec. 11, she defended her country’s treatment of its Rohingya Muslim minority and rejected claims that they have been subjected to genocide.

She called it unfair for Myanmar to be accused of violating the Genocide Convention, as for the crime of genocide to apply, there would have to be present a “specific intent to physically destroy the targeted group in whole or in part.”

Gambia, a predominantly Muslim African country, submitted the lawsuit against Buddhist-majority Myanmar on Nov. 11 with support from the Organization of Islamic Cooperation.

Suu Kyi also argued that if war crimes have been committed by members of Myanmar’s security forces, they should be prosecuted through the country’s own military justice system in accordance with its Constitution, not externally.