Is China following Japan into the haven of Southeast Asian nations?

BANGKOK — Even before the “phase one” trade deal was signed on Wednesday, U.S. President Donald Trump was showing an eagerness to begin “phase two” negotiations.

While this indicates tensions are easing, the rest of the world is beginning to look at campaigns like Beijing’s “Made in China 2025” strategy and conclude that the superpowers’ battle is the new normal.

This is reflected in the migration of manufacturing plants from China to other countries, like Samsung Electronics of South Korea moving smartphone handset production out of China’s Guangdong Province and into Vietnam. Many of the smartphones will go to the same market, the U.S.

But on what scale is this export substitution taking place?

Some $250 billion worth of made-in-China products were subjected to the first three rounds of retaliatory tariffs imposed by the U.S. by September 2018.

According to Mizuho Research Institute, the export substitution rate hovered largely at 12% to 14% in value terms between 2014 and 2018. But it jumped to 48% in 2019. In other words, nearly half of the Chinese products hit with tariffs were substituted out, replaced by goods exported from other countries.

Due to factors like China’s rising labor costs, export substitution was already taking place before the U.S.-China trade war erupted. Still, the leap that the rate took in 2019 shows manufacturers began transforming their supply chains in response to the U.S.-China trade frictions.

Going forward, other Asian nations like Thailand and Malaysia, whose supply chains are connected to China, will ship more products to the U.S. 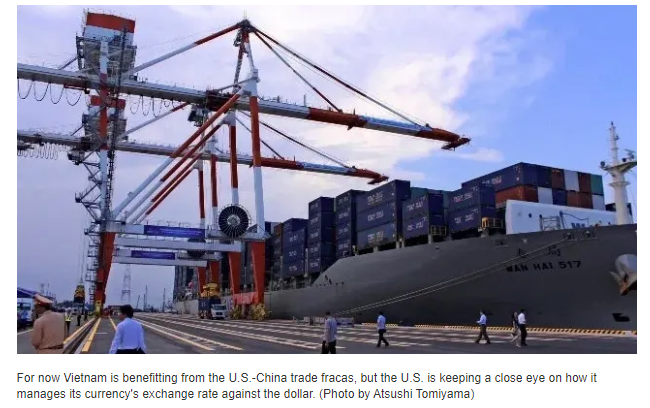 The production shift away from China is nothing new. After Japan in 2012 nationalized the Senkaku Islands, Okinawa Prefecture, souring Sino-Japanese relations, Japanese companies increased their investment in Southeast Asia. What is new this time is that Chinese companies are joining the exodus.

Amata Corp., the largest operator of industrial parks in Thailand, runs the Amata City Rayong factory district in eastern Thailand. In 2018, more than 80% of land in the zone that was sold went to Chinese companies.

This was partly attributable to an unwillingness of Japanese, U.S. and European businesses to invest in Thailand, which was under junta rule for almost five years from May 2014. But “with the outbreak of U.S.-China trade frictions, inquiries from Chinese companies began soaring,” said Viboon Kromadit, Amata’s chief marketing officer. Until several years ago, Japanese companies had accounted for the largest number of the industrial park’s customers. Today, however, one in three customers is a Chinese company, Amata said.

Amata runs an industrial park in Vietnam, too, with plans to expand into Myanmar and Laos — countries that border China — to attract Chinese manufacturers moving plants out of China, Viboon said.

The Association of Southeast Asian Nations has long been a corporate Japan stronghold. Japanese vehicles’ share of ASEAN’s new car market is roughly 80%. But will Chinese companies’ rush to relocate production to the region change the power structure?

China already overwhelms Japan in trade with ASEAN countries. After overtaking Japan in 2009, China has been widening its lead, especially since 2013, when Chinese President Xi Jinping unveiled his Belt and Road Initiative, an enormous infrastructure construction spree meant to hasten trade between China and much of the rest of the world.

Malcolm Cook, a senior fellow at the ISEAS-Yusof Ishak Institute based in Singapore, noted that it is not the U.S. that is being displaced by a rising China but Japan.

Koji Sako, a senior researcher at Mizuho Research Institute, takes issue with this view. He argues that in terms of trade in value added (the value added to a product or service in a country), Japan’s trade with ASEAN countries has not decreased that much. “Japanese companies are shifting their focus to investment from trade,” he said, “switching to a consolidated management model in which a company earns dividends from subsidiaries.”

Japan’s direct investment in ASEAN countries between 2013 and 2018 came to $102.3 billion, nearly twice as much as China’s $52.8 billion. The Industrial clusters that Japan has in the region represent the country’s strength.

Yet Japan’s lead is highly likely to diminish in the years to come as Chinese companies accelerate their investments in the region.

The Plaza Accord of 1985, an agreement pushed by Washington to appreciate the Japanese yen and Deutsche mark against the dollar, helped to persuade Japan Inc. to shift away from trade and toward investment.

The Japanese public-private sector’s joint Asia strategy, which involves providing official development assistance to less-developed countries so they can improve their infrastructure, brought a heavy concentration of Japanese companies to Thailand and other Asian nations.

Now it appears to be China’s turn to infiltrate Southeast Asia. Right now, the U.S. tariffs are doing the same job — eroding China’s export competitiveness — that a strengthening Chinese yuan might otherwise take on. The Belt and Road spending is also encouraging Chinese companies to expand abroad, especially into other Asian markets.

China appears to be following the same path Japan walked three decades ago, when U.S. policy was geared toward reducing imports from that era’s giant Asian exporter. Upon closer scrutiny, however, it is clear that China is charting its own course.

U.S. policy in the 1980s did not prevent Japanese companies from shifting their production bases to other Asian countries, from where exports to the U.S. swelled. So rather than increasing American exports, the Plaza Accord succeeded in opening the way for more Asian exports to the U.S.

Another unintended consequence: China began its rise as the world’s factory.

Has the U.S. learned from its policy missteps? Today, Washington is pressuring China, but there is a distinct possibility that it will also direct its ire toward Vietnam, Malaysia and Thailand — countries that enjoy big trade surpluses with the U.S. and could offer Chinese companies alternative export bases.

Washington is already showing signs of doing this. The Department of the Treasury in May revised a list of countries it believes are unfairly weakening their currencies against the dollar.

Of five countries newly added to the list, three belong to ASEAN — Malaysia, Vietnam and Singapore. If the U.S. intensifies its accusations against countries it regards as currency manipulators, it would inevitably slow the rush of Chinese companies expanding into these markets.

By the time Americans go to the polls in November for their country’s next presidential election, other dynamics could further divide the U.S. and China. Negotiations by 16 Asia-Pacific countries toward the Regional Comprehensive Economic Partnership is one example. Washington is not a party to the talks and has left Beijing to shape trade and other economic parameters for an enormous bloc of nations.

With the trade war expected to intensify in 2020, will China continue to expand into the rest of Asia as a way to escape U.S. policy constraints?