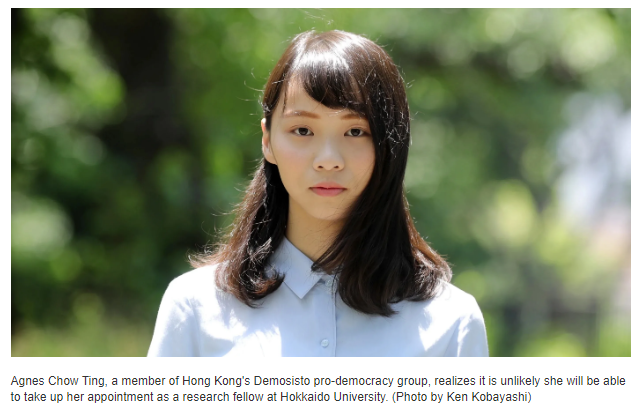 OSAKA — Agnes Chow Ting, a prominent figure in Hong Kong’s pro-democracy movement who is not allowed to leave the territory due to bail conditions, recently made an appearance in a Japanese university classroom via Skype.

According to a recording obtained by the Nikkei Asian Review, the 23-year-old spoke on Wednesday afternoon to about a dozen students studying current affairs at a Japanese university. The university refused to be identified out of fear of jeopardizing the safety of students involved, especially those from mainland China.

Chow, whose latest appeal to have the ban dismissed was rejected last month, originally planned to visit five Japanese campuses to talk about the situation in Hong Kong and where things are headed.

“I wish Japanese students to learn more about the background of Hong Kong demonstrations and the importance of democracy, beyond what has been reported in the media,” Chow said in an emailed response to Nikkei on Friday.

Private schools Meiji, Rikkyo and Ritsumeikan as well as national institutions the University of Tokyo and Tokyo University of Foreign Studies made a plea to the Hong Kong court to repeal Chow’s travel ban; they were turned down in December.

Demosisto revealed on Thursday that Chow was appointed as a research fellow at Hokkaido University.

Chow told Nikkei that she is “very honored” for the appointment and will mention the position in her next appeal, though she said “the possibility of going there is low.”

In her video presentation to and dialogue with students, Chow, speaking in fluent self-taught Japanese, admitted that she has been “scared for the last six months, witnessing suicides and mysterious deaths” among the territory’s youths involved in the demonstrations. 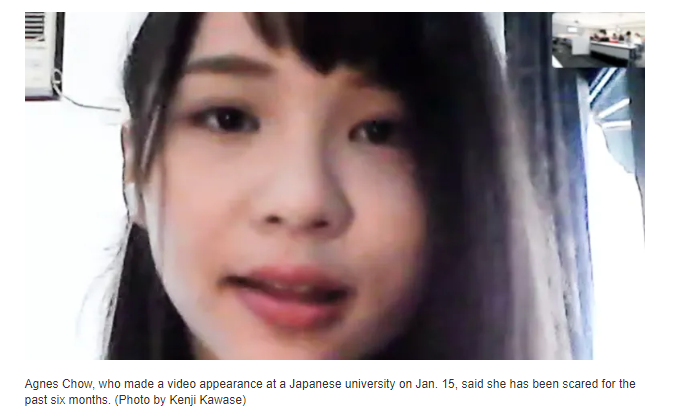 She dismissed the idea of surrendering violence in the movement’s quest to win five key demands, including complete universal suffrage and an independent inquiry into alleged police brutality. Beijing considers the demands unacceptable.

“For the past decade, we have protested peacefully,” Chow said, “but the government did not lend their ears to our views.”

A series of unfruitful peaceful campaigns, including the 79-day Umbrella Movement in 2014, coupled with “escalating police violence that could kill us” is inevitably driving some Hong Kong youths to resort to violent tactics.

According to Chow, critical voices claiming only peaceful means can prevail are “arrogant and missing the point as they do not understand the background of the whole movement.”

Some students questioned her on risks of tolerating violence by drawing a parallel to the once-popular Japanese youth political movement in the 1960s and 1970s. The protests, against the Japanese government renewing and enhancing the defense pact with the U.S., gradually lost public support as they grew more and more violent.

Chow said the analogy does not fit Hong Kong, where, she said, China is behind a crackdown on appeals for democracy. Beijing, she said, is “autocratic [and] the essence of the regime is different from the Japanese government then.”

Tokyo is governed under a democratically elected administration that can be voted out, while Beijing and Hong Kong lack such political and electoral systems.

“We are just small ants in front of the Chinese government, and if they wish to — of course I don’t want to see it happening but — something like [the] Tiananmen crackdown could take place,” Chow said.

On the other hand, she recognizes that Hong Kong society is divided, a situation that was reflected in the local district elections in November. The territory’s only fully democratic elections, for positions with limited political power, resulted in a landslide victory for the pro-democracy camp, which won 86% of the total seats in winner-take-all constituencies.

However, pro-democracy candidates garnered only 57% of the popular vote, while pro-Beijing candidates collected 42%. Chow believes this dichotomy will stay. “We understand it will be difficult to increase our support,” she said, as swing voters have already made up their minds and the middle ground is diminishing rapidly. “The most important point for us is on how to maintain the support that we have now.”

The travel ban was imposed by a court after Chow was arrested for alleged involvement in an illegal demonstration outside police headquarters and allegedly inciting others on June 21.

Her bail conditions also include reporting to the police twice a week and accepting a midnight-to-6 a.m. curfew.

Her appeal against the ban was rejected again on Dec. 19. Fellow leading Demosisto members Ivan Lam Long-yin and Joshua Wong have been hit with similar restrictions, and Wong was barred from visiting Taiwan to observe the elections there on Saturday.

In November, Wong chose to testify to the Italian parliament via Skype. The legislature was harshly criticized by Beijing, but this in turn resulted in a unanimous resolution supporting Hong Kong’s democratic movement.

Kenneth Roth, executive director at Human Rights Watch, wrote in the organization’s annual human rights report, released on Tuesday, that “the consequence under President Xi Jinping is China’s most pervasive and brutal oppression in decades.” This is spilling over into Hong Kong, where Roth believes “limited freedoms, under ‘one country, two systems,’ are being severely challenged.”

Roth, who himself was blocked from entering Hong Kong on Sunday to release the report, chided university administrations around the world. “Students from China who want to join campus debates on ideas that would be taboo at home,” he said, “feel they cannot for fear of being reported to Chinese authorities. Universities have done little publicly in such cases to assert the rights of free speech.”

Roth considers universities integral to free speech. “Universities, in particular, should provide a space where students and scholars from China can learn about and criticize the Chinese government without fear of being monitored or reported,” he said. “And they should never tolerate Beijing curtailing the academic freedom of any of their students or scholars.”