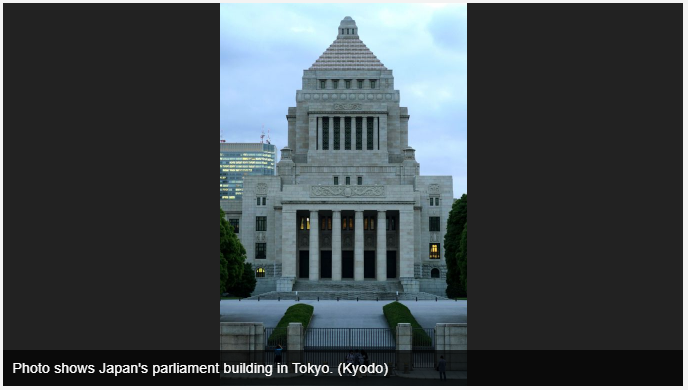 In his policy speech to mark the start of a regular parliamentary session, Abe also said he will pursue diplomacy with Japan’s neighbors, singling out a need to address strained ties with South Korea over the issue of compensation for wartime labor.

Abe called South Korea “the most important neighbor that essentially shares basic values and strategic interests” with Japan and urged it to build “future-oriented” ties, a month after his first formal talks with South Korean President Moon Jae In in about 15 months.

With little progress made toward attaining his goal of amending the decades-old, war-renouncing Constitution, Abe also asked lawmakers from all parties to move debate forward on the contentious issue, saying it is their responsibility to do so.

“I will promote social security and other bold reforms to reshape our country,” Abe said in his address at the opening of the 150-day session.

“With the start of the new era Reiwa, the approaching Olympics and Paralympics and an uplifting feeling they’ve brought, it is time for action,” he said.

The social security system revamp is one of the prime minister’s priorities given about one-third of the country’s population is aged 65 and older, while the number of newborns is at a record low.

The government implemented a 2 percentage point consumption tax hike in October, partly to fund an expansion in childcare support, while it plans to encourage more elderly people to work longer, pay more for medical services, and reduce their dependence on the pension system.

In his eighth policy speech since returning to power in 2012, Abe claimed he has succeeded in “overcoming the feeling of resignation” that had prevailed in the country, with a series of reforms such as the “Abenomics” policy mix that includes bold monetary easing by the Bank of Japan.

This year he did not mention the deflation which has plagued the world’s third-largest economy for decades, even with the BOJ still far from attaining its 2 percent inflation target.

The premier sought to signal a departure from the past, saying “Japan is not what it used to be.”

Another key feature is the focus on the Tokyo Olympics and Paralympics this summer as Japan aims to demonstrate its recovery from the massive 2011 earthquake and tsunami that triggered the Fukushima nuclear crisis. The government has pinned its hopes on the economic benefits the games will bring to regional areas.

As technological advances — ranging from artificial intelligence to next-generation 5G and later wireless networks — will have a “huge impact” on various aspects of society, Abe vowed to promote innovation as part of a national strategy.

Abe is now Japan’s longest-serving prime minister, having been in the role for seven years since returning to power following a short 2006-2007 stint with a pledge to rebuild the deflation-mired economy and improve the country’s diplomatic standing. He has traveled to 80 countries and regions, including Iran last year amid heightened tensions in the Middle East.

Still, he has yet to deliver on his pledge to resolve postwar challenges such as Pyongyang’s abductions of Japanese nationals in the 1970s and 1980s and the conclusion of a peace treaty with Russia by resolving a territorial dispute.

Abe reiterated his determination to meet face-to-face with North Korean leader Kim Jong Un “without preconditions” to resolve the abduction issue. He avoided explicitly referring to the nuclear and missile threat posed by North Korea.

Ahead of Chinese President Xi Jinping’s state visit scheduled for this spring, Abe said he wants to build “mature Japan-China relations for a new era.”

Placing the Japan-U.S. security alliance as the centerpiece of Tokyo’s diplomatic program, Abe has devoted his efforts to strengthening the arrangement and building a personal rapport with President Donald Trump.

Based on relations of “deep trust” that have been built between the two nations, Japan will aim to incrementally reduce the burden on Okinawa of hosting the bulk of U.S. military facilities, Abe said.

The speech did not make specific mention of a string of scandals that promise to cast a dark shadow over the regular parliamentary session through June 17.

Opposition parties are set to grill Abe and the government over the controversial handling of public documents related to a state-funded cherry blossom viewing party and a bribery scandal over the country’s introduction of casinos involving a ruling party lawmaker.

Former Justice Minister Katsuyuki Kawai and his wife Anri, both lawmakers from the ruling Liberal Democratic Party, have been under pressure to explain suspected overpayments to campaign staffers during the upper house election last year.

The government also needs to explain its recent decision to dispatch Self-Defense Forces personnel and assets to the Middle East for an intelligence-gathering mission, as Abe said in Monday’s speech that he is “deeply worried” about rising tensions there.

The mission is intended to help secure the safe passage of Japanese commercial vessels through the region’s shipping lanes.

The total number of bills to be submitted by the government will likely stand at 52, the lowest on record for a regular session since the Constitution entered into force in 1947.

The spending plans are intended to speed up recovery efforts from Typhoon Hagibis and other disasters that befell the country last year, cushion the negative impact from the Oct. 1 consumption tax hike — from 8 percent to 10 percent — and set the stage for growth beyond the Olympic and Paralympic Games.