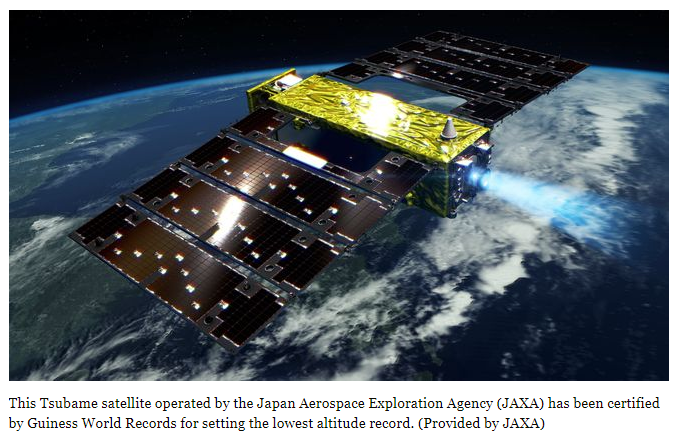 However, while most satellites orbit high above the Earth, the JAXA satellite Tsubame was recognized for achieving the lowest altitude, of only 167.4 kilometers. That broke the old mark of 224 km set by the European Space Agency.

Satellites that monitor the Earth with radio waves and other means normally orbit at altitudes of 600 to 800 km.

Heights of 300 km or less are called “super low altitudes,” drastically increasing resolution of a satellite’s imaging system. Orbiting at such low altitudes, however, means the air resistance rises 1,000-fold and requires huge amounts of fuel, making it difficult for satellites to operate at those heights for prolonged periods.

It was the first time that a satellite has continued operating at such a low altitude, according to JAXA representatives, on Dec. 24.

“A new course of travel has been developed,” said a JAXA official, referring to the achievement. “We will cash in on the success to realize the full-fledged use of satellites at low altitudes.”

Tsubame, which measures 1 meter tall, 5 meters wide and 2.5 meters long, was equipped with an optical camera and other devices.

After launch in December 2017, Tsubame reached a height of 270 km in April 2019. Its altitude has since gradually been reduced and the satellite orbited at 167.4 km for seven days from Sept. 23.

On Oct. 1, Tsubame re-entered the atmosphere where it burned up.

The Tsubame’s ion engine to keep it on course was developed based on the technology tested by the Hayabusa 1 space probe, which brought back a sample from the Itokawa asteroid.

Although the engine, which is also used for the Hayabusa 2, can generate only enough power to barely move a tiny 1-yen coin (1 cent), its energy efficiency is far higher than that of a conventional gas engine. The feature is why it was adopted for the long-operating satellite.