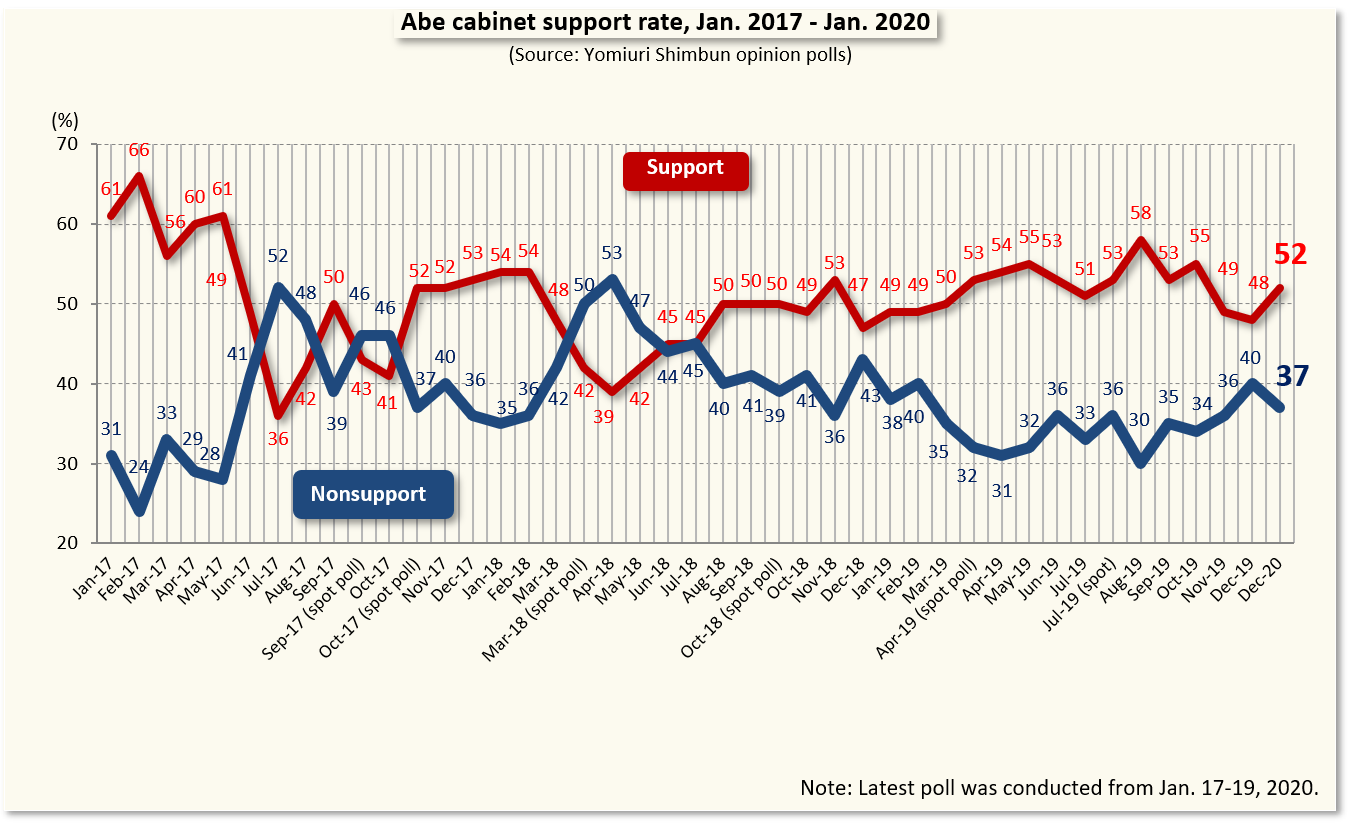 In the nationwide public opinion survey conducted by the Yomiuri Shimbun on Jan. 17–19, a total of 50% of respondents said that they support the government’s dispatch of Maritime Self-Defense Forces (MSDF) to the Middle East to gather information regarding sea lanes, exceeding the 35% who said they disapprove of the move.

Asked for their views on promoting the introduction of integrated resorts (IRs) with casinos in Japan, those opposed exceeded those in favor 58% to 30%. Even among ruling party supporters, over half (52%) said they oppose the initiative.

The poll probed views on what policy or issue respondents would like see prioritized at the ordinary Diet session, which will be convened on Jan. 20. Given seven items to choose from and permitted to give multiple responses, 83% said “social security, including healthcare and pensions,” making it the most frequently given response. This was followed by “economy and jobs” at 79% and “education and childrearing support” at 71%. Meanwhile, 51% said “corruption and scandals involving politicians.”

The percentage of pollees expecting the Commission on the Constitution in each house of the Diet to engage in active debate on constitutional amendment dropped to 45% from the 57% found in the previous poll. Meanwhile, 49% said they do expect debate to become more active (35%). Those pessimistic about energetic debate now exceeds those optimistic about it.

Asked what political party they support, 41% said the “Liberal Democratic Party” (37%), and 7% said the “Constitutional Democratic Party of Japan” (6%). A total of 39% of pollees identified themselves as independents. [JMH created and added the line graph based on Yomiuri opinion poll data.]

[Polling methodology: The nationwide survey was conducted on Jan. 17–19 on a computer-aided random digit dialing (RDD) basis and targeted voters aged 18 or over with calls placed to landline and mobile phone numbers. Valid responses were received from a total of 1,068 persons, including 542 persons (out of the 928 households with one or more eligible voters) for landline numbers and 526 persons (out of the 1,242 persons who answered) for mobile numbers. The valid response rates were 58% for landline numbers and 42% for mobile numbers. Figures are rounded off. In some graphs and charts, the total percentage may not add up to 100%. “0” indicates that the figure was below 0.5%, and “–” denotes that no respondents gave that answer.]