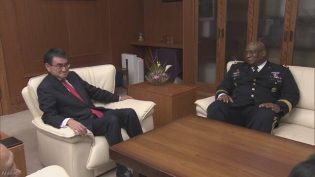 NHK reported online on Tuesday evening that Defense Minister Kono met with Lt. Gen. Hooper, Director of the Defense Security Cooperation Agency, who is in charge of the foreign military sales (FMS) program, in which Japan directly procures defense equipment from the U.S. government. Kono reportedly asked for U.S. cooperation in improving the FMS system, saying: “We have been making efforts to resolve the issue of delays in the delivery of and payment for military equipment. In order to speed up procurement, we need to improve the system.” In response, Lt. Gen. Hooper reportedly said: “We want to demonstrate that FMS provides Japan with the world’s finest equipment in the most efficient and fastest way. We will hold thorough discussions with Japan on the concerns expressed by Minister Kono.”