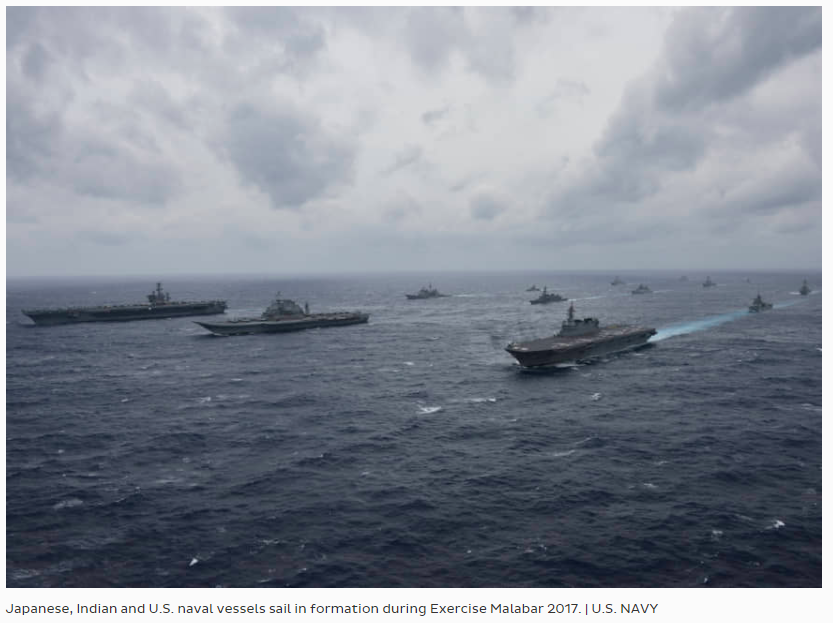 NEW DELHI – The arrival of China as a major actor in the international system is causing structural shifts in the distribution of power as it challenges the role of the United States and its allies. In its attempt to alter the existing hierarchy of states and exert its primacy, China has challenged the core tenets of the U.S.-led liberal international order.

For traditional U.S. allies like Japan — a critical anchor in the hub-and-spokes San Francisco system of alliances — the strategic calculus has complicated even more under the Trump presidency.

At the global level, U.S. President Donald Trump’s “America First” policy is underscored by an imprudent transactional approach, lacking a nuanced understanding of alliance management, and an aversion toward multilateralism, challenging the very rules that the United States created and has upheld since the end of World War II. At the regional level, strategic fluidity in East Asia is influencing Japan to revisit its grand strategy. Although the overall U.S.-China military balance remains favorable in terms of aggregate capabilities, Japan is acutely aware that Beijing does not need to catch up to the U.S. globally to dominate its immediate periphery.

Prime Minister Shinzo Abe envisages Japan as a leading promoter of international rules and a guardian of the global commons in the Indo-Pacific, underpinned by alliances with fellow democracies. In the Cold and post-Cold War era, Japan’s policy choices have been analyzed within the narrative of a reactive state. Countering the reactive state thesis, Abe put forward Japan’s role as a “proactive contributor to peace,” underpinned by the notion of positive pacifism, while dealing with the challenges to the international order. In other words, Japan ought to play a role in upholding international security by moving from passive/negative pacifism to active/positive pacifism.

As the East Asian order becomes more contested, pursuing Japan’s national interests in the U.S.-China-Japan triangle is one of the biggest challenges in Abe’s strategy. To that end, Tokyo is pursuing both internal and external balancing.

On the one hand, it is adapting Japan’s exclusively defense-oriented post-war security posture based on its threat assessment vis-a-vis North Korea and China. The Abe government is also demonstrating a willingness to invest more in bolstering the alliance with the U.S. on one hand and in designing a universal values-based network of allies in the Indo-Pacific on the other.

As the logic of Japan’s values-based approach, rooted in the primacy of universal values like rule of law, democracy and human rights, gained primacy in both the first and second Abe administrations, India featured as an anchor in Japan’s important strategic conceptualization like the “Arc of Freedom and Prosperity,” “Confluence of the Two Seas,” “Quadrilateral Initiative,” Asia’s “Democratic Security Diamond” and the latest “Free and Open Indo-Pacific Vision.”

Key policy documents from Tokyo articulate the significance of a rising India. For instance, the maiden National Security Strategy 2013, which predates both Trump’s America First policy and Abe’s Free and Open Indo-Pacific articulation, pledges to “strengthen cooperative relations with countries with which it shares universal values and strategic interests, such as South Korea, Australia, the countries of ASEAN and India.”

In addition, the National Defense Program Guidelines, defense white papers, and the diplomatic blue book underscored the significance of cultivating multifaceted and multilayered defense cooperation with priority countries such as Australia, India and ASEAN countries in addition to the U.S.

New Delhi also started featuring in Tokyo’s security outlook as the U.S. Defense Department recognized its potential as an enduring security partner. The U.S.-Japan Security Consultative Committee in 2007 underscored the need to nurture partnership with New Delhi as India’s continued development is “inextricably tied to the prosperity, freedom, and security of the region.”

Later that year, Abe articulated his concept of the “Confluence of the Two Seas” in New Delhi. The following year witnessed the India-Japan Joint Declaration on Security Cooperation, the goals of which were clarified in the action plan issued in 2009. The subsequent Japan-U.S. Security Consultative Committee articulated welcoming “India as a strong and enduring Asia-Pacific partner” and supported greater involvement with India in trilateral framework.

Meanwhile, the Japanese strategic community has articulated the mutuality of interests and “shared responsibility” that Tokyo and New Delhi has in securing the sea lines of communication (SLOCs) as a regional “public good.” India’s naval capabilities are positively perceived by Japan in relation to China. Japan’s primary concern is to avert any potential Chinese interference in SLOCs passing through the Indian Ocean as energy-deficient Japan is heavily dependent on Middle Eastern oil imports.

As parties to UNCLOS, India and Japan uphold the principle of freedom of navigation and overflight, peaceful settlement of disputes and unimpeded lawful commerce in critical sea lanes across the Indo-Pacific. For a secure maritime domain, India unveiled its Indo-Pacific Oceans Initiative last November, following up on Prime Minister Narendra Modi’s Indo-Pacific Vision articulated at the 2018 Shangri-La Dialogue.

As India builds partnerships among interested states, it finds consonance in Japan’s Vientiane Vision 2.0, whose objective is to ensure rule of law, maritime security, capacity building, disaster prevention and management of nontraditional threats. The India-Japan maritime affairs dialogue should explore mutuality of interests in this regard.

To help the operational capacity of both forces during humanitarian assistance and disaster relief operations, joint training, and exercises, the Acquisition and Cross-Servicing Agreement currently under negotiation will facilitate reciprocal support with regard to logistics, supplies, and services. India will likely emulate the same model followed in the Logistics Exchange Memorandum of Agreement with the United States and will not provide for the establishment of any bases or basing arrangements.

Aimed at enhancing interoperability, India-Japan security cooperation is defined by the growing operational depth and geographical latitude of bilateral and even trilateral exercises with the U.S. In addition, the agreement on maritime domain awareness in the Indo-Pacific lays the foundation for future strategic information sharing.

Besides maritime security, developing strategic connectivity within and among the critical subregions of the Indo-Pacific for better economic linkages and integration as markets is a priority in both India and Japan. This led to the conceptualization of the Asia-Africa Growth Corridor. Third-country collaborative infrastructure cooperation has started to take shape in Sri Lanka, Myanmar, and Bangladesh. The idea is to coordinate bilaterally and possibly with others like within the India-U.S.-Japan trilateral framework for advancing strategic infrastructure.

In connecting the economic growth poles in the subregions of the Indo-Pacific, Japan has demonstrated leadership through its Expanded Partnership for Quality Infrastructure (EPQI).

Tokyo is separately working with both India and the U.S. in advancing infrastructure and connectivity and capacity building in the Indo-Pacific.

In the future, the Japan-U.S.-India Trilateral Infrastructure Working Group can explore projects in critical subregions of the Indo-Pacific including Southeast Asia (focusing on the Mekong region) or South Asia (focusing on the Bay of Bengal). With the U.S.’ BUILD Act, the International Development Finance Corporation and Infrastructure Transaction and the Assistance Network aimed at utilizing private sector capital and skills in the economic advancement of developing economies, trilateral projects should be explored. This can be aligned with India’s SAGAR vision and line of credit to littorals.

Joining forces as potent Asian economies and powers, India and Japan have invested in progressive thinking and coordinated on key issues such as maritime security and strategic connectivity at the bilateral, trilateral, and multilateral level. Going forward, Japan and India have to work individually, bilaterally, and trilaterally to make China constructively engage in maintaining the liberal order underpinned by universal values.

Titli Basu is an associate fellow at the East Asia Center in Institute for Defense Studies and Analyses in New Delhi.