Abe calls for vigilance, steps against spread of new coronavirus 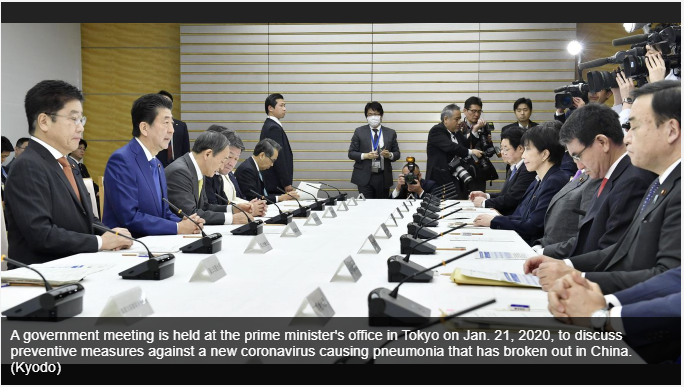 TOKYO — Prime Minister Shinzo Abe said Tuesday Japan needs to be on high alert and take necessary measures against a new coronavirus amid a spike in patients in China ahead of the Lunar New Year holidays.

In a meeting at the prime minister’s office, Abe instructed Cabinet ministers to strengthen quarantine efforts, monitor patients suspected of contracting the virus and gather the latest information in coordination with international organizations.

“Although we are not in a situation in which continuous human-to-human transmission has been confirmed, the number of patients has been rising in China. We need to be more vigilant,” Abe said during the meeting.

As of Monday, around 220 people were confirmed to have been infected with the new coronavirus in cities and provinces in China, including Beijing and Shanghai. A fourth person has died of pneumonia caused by the virus, local health authorities in the Chinese city of Wuhan said Tuesday.

Japan confirmed its first case of infection last week after a man in his 30s tested positive for pneumonia caused by the new coronavirus. He returned to Japan in early January after travelling to Wuhan where the virus outbreak likely originated in December.

Japanese authorities are stepping up efforts to prevent the spread of the virus as many Chinese tourists are expected to arrive in Japan during the Chinese New Year holidays from Jan. 24 to 30.

Chief Cabinet Secretary Yoshihide Suga said the government will do “all it can” to prevent an outbreak in the country.

“We will ask passengers flying from Wuhan to answer questionnaires about their health condition,” Suga said at a press conference.

“We also have a system at hospitals across the nation to monitor pneumonia patients if they have traveled to Wuhan and the cause (of infection) is not clear,” the top government spokesman said.

Amid the surge in infections in China, the World Health Organization is expected to convene an emergency meeting later this week.