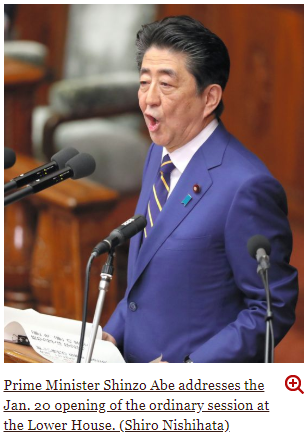 Prime Minister Shinzo Abe’s policy speech to kick off this year’s ordinary Diet session gave no signs of a serious commitment to improving the health of the government’s deficit-ridden budget.

The government has pledged to achieve a primary budget surplus in fiscal 2025 as a key target for its policy efforts to clean up the fiscal mess. The primary surplus or deficit equals government tax revenue minus all spending other than principal and interest payments on past debts.

As in his past seven agenda-setting speeches to open a regular Diet session delivered since his return to power in late 2012, which all referred to “fiscal reconstruction,” Abe again pledged to “continue seeking to achieve a primary surplus in fiscal 2025” in his address on Jan. 20.

But the new fiscal projections for the years through fiscal 2029 announced by the government last week offered little hope of striking the target by the end of the period.

Assuming that Japan’s economy will grow at an average real annual rate of around 1 percent, close to the average in the past seven years, the central and local governments will still have a combined primary deficit of 8.2 trillion yen ($74.56 billion) in fiscal 2025, which starts in April 2025, according to the projections.

Even if economic growth is much faster at a real annual rate of around 2 percent and a nominal rate of over 3 percent, the target will be achieved only in fiscal 2027.

A primary surplus means the government can fully finance its policy expenditures with its receipts without new borrowing. It is a key measure of the financial sustainability of the government’s policy programs.

The target was originally set with such key fiscal factors in mind as expected rapid expansion of health care and other social security spending due to the aging of the population and growth in outlays to renew infrastructure built during the era of the nation’s high economic growth.

But the deadline for accomplishing the goal has been moved back repeatedly. The Abe administration initially aimed to achieve a primary surplus in fiscal 2020, but pushed back the target year to fiscal 2025 two years ago.

Prior to that decision, a government study group reviewed the policy efforts for better fiscal health. The panel cited three reasons for slow progress in the efforts: weaker-than-expected growth in tax revenues; delays in the consumption tax hike; and supplementary budgets compiled almost every year.

The panel called on the government to establish a system to ensure that the budget target will be achieved regardless of changes in economic conditions.

Abe himself has promised to fix Japan’s budget problem to avoid shifting burdens to future generations. If he is serious about tackling this challenge, Abe should follow the panel’s advice and adopt its proposal.

The Abe administration’s economic policy has been based on the notion that “fiscal rehabilitation is impossible without economic regeneration.” But the question is how actually effective this policy has been.

There is no disputing the need to promote economic expansion, but this imperative does not justify increased unnecessary spending under extra budgets formulated on the pretext of revitalizing the economy.

It is also necessary for the government to reassess its tax revenues estimate constantly from the viewpoint of whether they are based on unreasonably high economic growth projections.

The government needs to base its economic and fiscal policy targets on realistic growth forecasts in line with past records. If it has to introduce new policy programs, it should use rigorous evaluation criteria to focus on high priority measures.

Abe is responsible for offering a specific and workable plan to achieve the fiscal health target.

Abe plans to ensure swift passage of a supplementary budget for the current fiscal year, which ends in March, during the Diet session that began on Jan. 20.

The spending plan has to be scrutinized carefully and conscientiously since it includes a hodgepodge of expenditures in the category of “measures to stimulate growth.”

The ruling and opposition parties should engage in meticulous, good-faith debate on the spending bill to eliminate wasteful expenditures instead of simply working to pass it quickly.