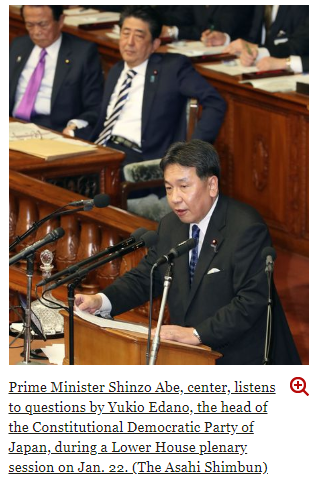 Prime Minister Shinzo Abe’s replies to opposition leaders’ questions and requests related to his Jan. 20 policy address to open this year’s ordinary Diet session did little to help him regain the public’s trust.

As opposition party representatives on Jan. 22 started questioning him over various scandal-related issues he did not touch on in his speech, Abe simply repeated what he had already said about them.

At the outset of his speech to question Abe, Yukio Edano, the head of the Constitutional Democratic Party of Japan, said he would focus his questions on “the Abe administration’s culture” of “vested interests, personal gain and cover-up.”

With regard to allegations concerning cherry blossom parties hosted by Abe, Edano said inviting many of his supporters in his electoral district to the event, where free food and drinks were offered, was tantamount to buying votes.

Abe rebutted Edano’s argument, saying his recommendations of guests to be invited to the party did not represent a violation of the Public Offices Election Law since the list was finalized by the Cabinet Secretariat and the Cabinet Office. Abe also said there was nothing legally wrong about a banquet at a Tokyo hotel held on the eve of the cherry blossom viewing event that was sponsored by Abe’s support group.

But Abe showed no signs of a willingness to make active efforts to clarify allegations against him.

He refused Edano’s request for disclosure of detailed information about the expenses for the pre-event banquet, saying that the hotel is declining to submit the document on the grounds that it contains “business secrets.”

Abe also said he had no intention of ordering a fresh investigation into the list of the guests invited to last year’s cherry blossom event, which the government claims has been destroyed.

As for this issue, related past documents were recently found even though the government had said they had been destroyed after the period of preservation expired.

There is no denying the possibility that the list for last year’s event might have remained in some form.

Abe also rejected Edano’s demand concerning the destruction of digital data about the invited guests. The opposition leader demanded that the computer’s history file be checked to identify the date of the data deletion, but Abe turned it down, saying the step could “encourage illegal access” to data in the computer.

Abe exhibited a similar unwillingness to make sincere responses to questions about the other two scandals.

While saying he took seriously the arrest in December of Tsukasa Akimoto, whom he appointed as senior vice minister at the Cabinet Office in charge of casino-centered resort projects, Abe pledged to maintain the policy for promoting integrated resorts, arguing that IRs are not merely casinos but also “entertainment facilities” for families as well.

As for the resignations of two Cabinet members, who have yet to make any clear responses to the allegations against them, Abe only said, “Each and every politician needs to act in a responsible manner,” putting the responsibility to answer related questions entirely on the two politicians.

By doing so, Abe defaulted on his responsibilities as the person who appointed them.

After posing these questions about the scandals, Edano laid out his party’s “vision” for a new administration to replace Abe’s. The vision includes the party’s policy proposals as alternatives to the Abe administration’s economic, social security and energy policies.

The vision calls for a policy shift away from the principle of self-responsibility and “a government that is too small to be responsible” and for changing the way wealth is redistributed.

In his questioning speech on Jan. 22, Yuichiro Tamaki, leader of the Democratic Party for the People, stressed the importance of policies focused on problems concerning women, children, young people and the environment.

Both Edano and Tamaki tried to underscore differences of their respective parties’ policies from those being promoted by Abe with an eye to the next Lower House election.

The two opposition parties have failed to reach an agreement on their merger in talks that started late last year and decided to cooperate as a unified bloc within the Diet between two separate parties.

The two parties should not allow the breakdown of the talks to hamper their cooperation so that they can unite to confront the Abe administration in their joint efforts to rebuild the nation’s democracy.