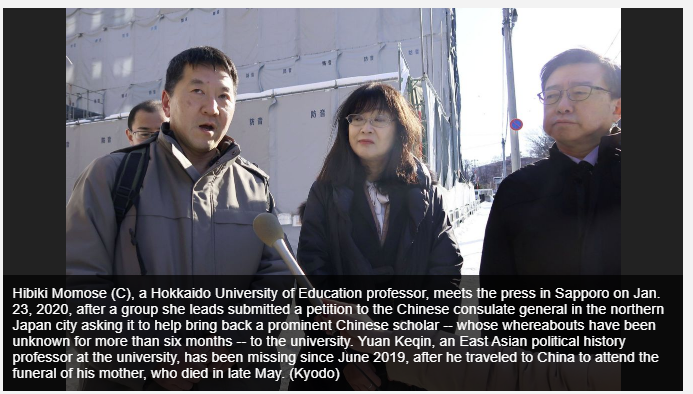 SAPPORO — A group led by a Japanese professor on Thursday submitted a petition to the Chinese consulate general in Sapporo, asking it to help bring back a prominent Chinese scholar — whose whereabouts have been unknown for more than six months — to a Hokkaido university.

Yuan Keqin, a professor of East Asian political history, has not been in contact with Hokkaido University of Education since mid-June, after he left for China to attend the funeral of his mother, who died in late May, according to the university and his friends.

The university last heard from his wife in July that Yuan was being treated for an illness. Some friends of the professor are worried that he might have been detained by Chinese authorities.

Yuan’s colleague, professor Hibiki Momose, his students and others said in the petition that Yuan has long contributed to the friendly ties between Japan and China by helping Chinese students studying at the university.

“We all hope that professor Yuan will return safe as early as possible,” Momose told reporters.

The group left the petition in a mailbox after being told the consulate general cannot meet them without an appointment.

Yuan, born in China’s Jilin Province in 1955, studied law at Hitotsubashi University graduate school in Tokyo, and is a permanent resident of Japan.

Iwatani specialized in studies on the Chinese Nationalist Party during the Sino-Japanese War from 1937, a field close to Yuan’s field of expertise.