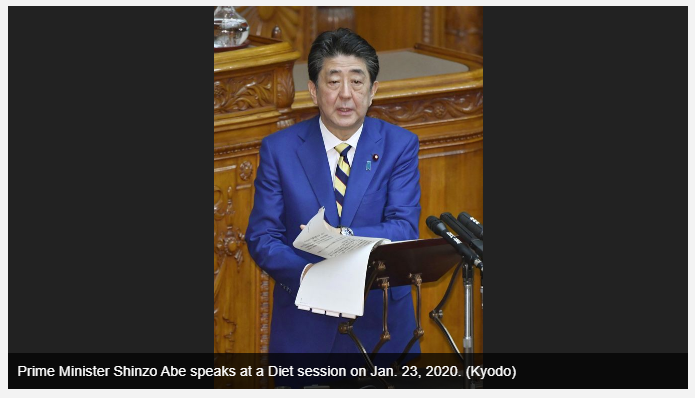 TOKYO — Japanese Prime Minister Shinzo Abe on Thursday denied he made false statements over a publicly funded cherry blossom viewing party and pledged a “comprehensive” review of the event as the opposition piled pressure on him.

The premier has come under criticism that he used taxpayers’ money to entertain supporters at the annual event. “It’s not true that I have been hiding something and making false statements to parliament,” Abe told a Diet session in response to a senior opposition party member’s call for his resignation over the scandal.

Major opposition parties have been seeking clarity over the annual cherry blossom viewing party that they claim the prime minister has used for personal gain by inviting hundreds of his own supporters.

The number of invitees and the amount of government spending have increased under the Abe administration since 2012. As the opposition last year took issue with the government event, intended to honor people such as athletes and celebrities for their accomplishments, Abe announced its cancellation for this year.

“The event has been carried out in line with the government’s long-held practice. But as I know there has been growing criticism from the Japanese people, I will sincerely reflect on this and conduct a thorough review as part of my responsibility,” Abe said at a plenary session of the House of Councillors.

The couple faces allegations that daily allowances exceeding their legal limits were paid to campaign staff working for Anri’s camp in an upper house election in July.

Abe said he takes the blame for having appointed Kawai and other aides as Cabinet ministers who later resigned following money and gift-giving scandals. “Each politician needs to straighten up and I believe they will explain themselves as much as possible,” he said.

In the run-up to the upper house election, the LDP funneled between April and June last year a total of 150 million yen ($1.4 million) — or 75 million yen each to the party’s local chapters headed by Kawai, a lower house member, and his wife in Hiroshima Prefecture, sources close to the matter said Thursday.

The revelation shows Anri’s camp received far better treatment from the party headquarters than the local chapter of another LDP candidate Kensei Mizote, who vied with Anri for a seat in the same constituency. Mizote received only a 10th of that amount — or 15 million yen, according to the sources.

Mizote is a heavyweight in an intraparty faction headed by former Foreign Minister Fumio Kishida, who is now touted as a potential successor to Abe as prime minister. But Mizote failed to secure a seat in the district.

Following the revelations on campaign funding, an LDP official said, “We deal with (the issue of) political funds appropriately according to law.” In Thursday’s session, Abe did not comment on the matter.

Both Kawai and Anri have refrained from revealing details of the alleged overpayment, citing ongoing investigations. Prosecutors have raided their offices over suspected violation of the public offices election law.