Olympics: Tokyo preparations largely on track with 6 months to go 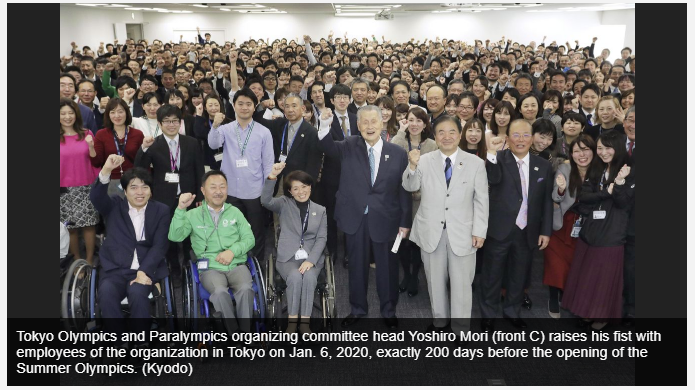 TOKYO — With Friday marking exactly six months until the opening ceremony of the Tokyo Olympics, organizers’ preparations are on track and public interest appears to be building, despite some remaining challenges.

Nearly 5 million tickets for the Olympics, accounting for roughly half of the total, have already been sold domestically after two phases of heavily subscribed lotteries.

Lagging facility construction for the Olympics and Paralympics is unlikely to make headlines again, with the last two of nine new venues in the Japanese capital expected to be completed by March and all 21 residential buildings in the athletes’ village to be in place before its opening on July 14.

But there have been difficulties as well. The most notable blemish in the Summer Games’ buildup for local organizers has been the relocation of the marathon and race walks events to the northern city of Sapporo at the behest of the International Olympic Committee.

The IOC made the abrupt decision last October, citing concerns about the extreme summertime temperatures in Tokyo. The world body was spurred to move the events following the disastrous women’s marathon at the world athletics championships in Doha, Qatar, a month earlier, which saw dozens of runners pull out with heat exhaustion.

The Tokyo Games organizers have scrambled to get their dates and courses in Sapporo settled but must still arrange transport and lodgings for some 2,000 athletes and staff.

The Russian flag and national anthem could be absent for a second straight Olympics, following the Pyeongchang Winter Games, after the World Anti-Doping Agency in December imposed a four-year ban from major international sporting events over alleged state-sponsored doping and repeated coverups.

Russia’s anti-doping agency RUSADA has filed an appeal with the Court of Arbitration for Sport, but if it fails, Russian athletes cleared of doping will compete under the Olympic flag as individual athletes.

The Olympics will be held in Tokyo and nine prefectures across eastern Japan at 24 venues inside the capital and 17 outside, while the Paralympics will be in Tokyo and three other prefectures. The organizers have scheduled 56 test events in the run-up to both games to identify any issues and ensure smooth running.

The games will be a nationwide affair thanks to the 478 “host towns” across all 47 prefectures, welcoming athletes from 163 countries and regions for camps and cultural exchanges in a first-of-its-kind program.

The Japan segment of the 121-day torch relay for the Olympic flame, dubbed the “Flame of Recovery,” will start on March 26 at J-Village soccer training center in Fukushima Prefecture, which served as an emergency response headquarters during the 2011 nuclear crisis. The torch will also travel through all 47 prefectures.

Along with holdovers from Tokyo’s previous Olympics in 1964, such as Nippon Budokan for judo and karate, the venues inside the metropolis will be a mixture of past legacy and cutting-edge facilities.

The completed 60,000-seat National Stadium will host the Olympic and Paralympic opening and closing ceremonies, along with athletic events and Olympic soccer. The 2020 centerpiece, with a nature-themed exterior, began operation on New Year’s Day with the Emperor’s Cup soccer final.

The Japanese Olympic Committee has set a target of a record 30 gold medals for the country. On Thursday, the official uniform of the Japanese national team to be worn by athletes at the games was unveiled.

“Of course people focus on how well athletes perform when competing in their own country,” she said last week during a briefing organized for foreign media organizations in Tokyo. “In the Rugby World Cup last year, the Japanese team did so well in making it to the knockout stage, which really helped the entire nation get excited.”