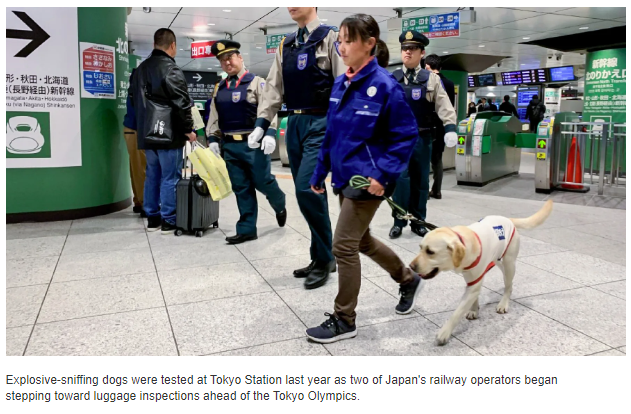 East Japan Railway and Central Japan Railway, commonly known as JR East and JR Tokai, will employ explosive-sniffing dogs to check the bags of passengers in line for tickets, waiting to go through the wickets and at other points in shinkansen stations.

Between 10 and 20 explosive-sniffing dogs have already been trained. Each dog will be deployed with a handler. When a dog sniffs out a suspicious bag, its handler will let the passenger know what is happening and conduct a search.

JR East and JR Tokai in 2019 jointly tested the sniffer dog and handler teams at Tokyo Station with no major confusion, according to the railway companies.

The railway operators came to prefer sniffer dogs over X-ray and other detection equipment due to concerns about bottlenecks and space constraints.

Sniffer dogs should be able to carry out checks without hindering the flow of passengers or taking up large amounts of floor space, the companies reasoned.

Security is being beefed up in other ways as well. JR East is increasing the number of security cameras installed in station buildings and on trains, and JR Tokai plans to deploy more security guards on its trains.

The Tokyo Metropolitan Government’s Bureau of Transportation, meanwhile, seeks to introduce “body scanners” to the subway network it operates. The scanners use electromagnetic waves to detect objects obscured by clothing.

Every day, nearly 200,000 shinkansen passengers transit through Tokyo Station, and traffic is expected to increase during the Olympics and Paralympics.

Japan’s bullet trains are known for their convenience. Not only are they fast, but they bring travelers from city center to city center. They free passengers from having to travel to and from airports, and from having to arrive hours before departure for security and other checks.

This lends a casual atmosphere to shinkansen stations, one that former Nissan Motor boss Carlos Ghosn on Dec. 29 used to his advantage in fleeing the country and jumping bail. At a little after 3:30 p.m. that day, Ghosn and two other men boarded a shinkansen at Tokyo’s Shinagawa Station, arriving later at Shin-Osaka Station.