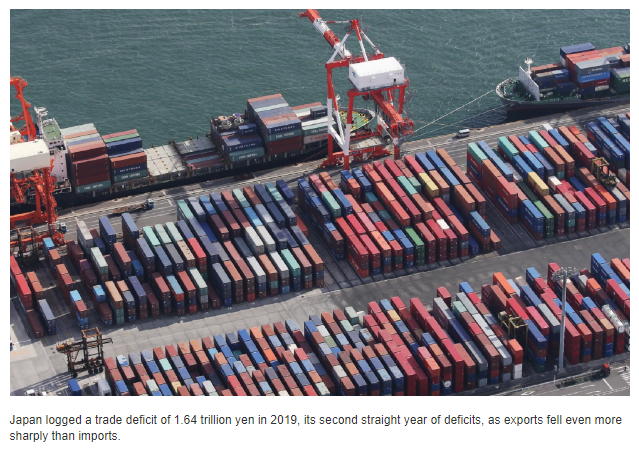 TOKYO — Japan’s imports and exports last year both fell for the first time in three years in 2019, as the U.S.-China and Japan-South Korea trade disputes dented shipments across Asia.

Exports tumbled 5.6% in value terms from the previous year to 76.93 trillion yen ($701 billion), according to preliminary data from the Ministry of Finance, dragged lower by a 7.6% decline in shipments to China. Imports dropped 5.0% to 78.57 trillion yen due to lower energy prices.

China was Japan’s biggest export market in 2018 but fell to the No. 2 spot last year.

Shipments of semiconductor equipment were down 16.6% and those for electronic components fell 10.6%.

The trade war and deepening friction over high technology weighed on China’s production and investment, which, in turn, hit the supply of manufacturing equipment and parts from Japan to China. China’s gross domestic product growth fell to a 29-year low of 6.1% last year.

The cooling demand rippled across Southeast Asian countries that supply parts to China, denting demand for Japanese machinery, steel, chemicals and other products. Exports to Singapore slipped 14.9% and those to Thailand were 7.6% lower.

Japan’s own trade dispute with South Korea led to a 12.9% drop in exports to that country, falling to 5.0 trillion yen. Shipments of manufacturing equipment for semiconductors plunged 49.7%, while food shipments fell 22.6%.

Exports to the U.S., which replaced China as Japan’s top export destination, fell 1.4% to 15.25 trillion yen, led by weaker shipments of cars and steel.

Imports of mineral fuels, which account for about a fifth of Japan’s total, fell 12.1% to 16.96 trillion yen due to lower energy prices. But a steeper decline in exports resulted in a trade deficit of 1.64 trillion yen, marking Japan’s second straight year of deficits.

Exports in December fell 6.3%, year-on-year, to 6.06 trillion yen, the 13th straight month of falls. But exports to China turned higher for the first time in 10 months, rising 0.8% to 1.4 trillion yen, thanks to a 59.7% jump in shipments of manufacturing equipment for semiconductors.