Editorial: Companies must bargain in good faith in ‘shunto’ negotiations 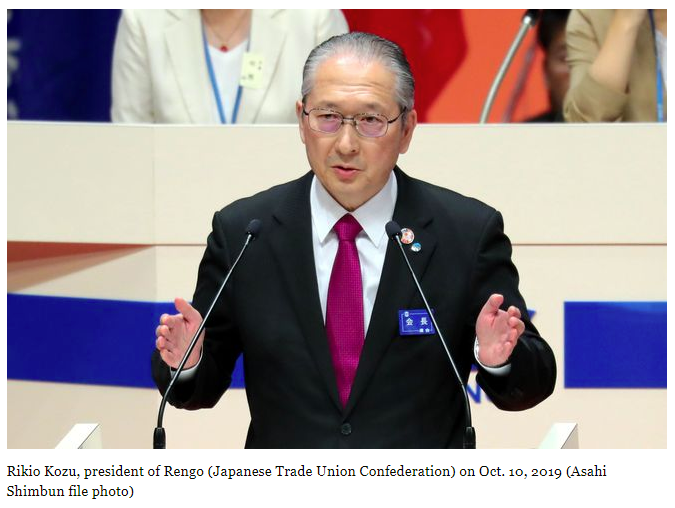 This year’s “shunto” (spring battle) annual wage negotiations between Japanese companies and their labor unions are coming into full swing.

Despite growing uncertainty in the nation’s economic outlook, the upward trend in wages in the past several years should be maintained for steady pay growth.

Rengo, the Japanese Trade Union Confederation, the umbrella organization of labor unions in Japan, decided on a set of principles for this year’s shunto negotiations during its central committee meeting last month.

Rengo has decided to call for a monthly base-pay increase of around 2 percent. Its other demands include greater equality in wages, or narrower wage gaps among workers irrespective of the size of their companies or their employment formats (full-time or part-time employees, for instance), and minimum-wage agreements within companies to prop up pay levels.

Meanwhile, Keidanren (Japan Business Federation), the nation’s largest business lobby, pledged in a recently published report to encourage its member companies to consider wage hikes “in a forward-looking manner” depending on each company’s management situation to “maintain wage growth momentum.”

While it expressed its intention to give “consideration to social expectations (for wage hikes),” Keidanren also pointed out “concerns about possible downward pressure on corporate earnings” due to a slowdown of the world economy.

The business organization has apparently become more cautious about talking about pay raises. The chairman’s preface to last year’s same report included a passage saying, “maintain and enhance the wage growth momentum.” But the phrase has been changed to “continue” the momentum.

Indeed, the Japanese economy has weakened since the second half of 2019 due to the combined effects of the prolonged trade spat between the United States and China, the consumption tax rate hike to 10 percent in October and a series of natural disasters that hit Japan last year.

It is unclear at the moment how vigorously the economy will rebound in the coming months.

Even so, Japanese companies’ sales and profits are, by and large, at high levels. Many firms have built up cash reserves during the past several years of strong earnings performances and are in good financial shape. Corporate investment in facilities and equipment has also been on a firm footing.

While wages have been on an upward trajectory the past several years, prices have also been creeping up. As a result, real wage growth has been weak, failing to keep up with improvement in labor productivity, according to one analysis.

In other words, workers have not received their fair share of the benefits of the nation’s economic recovery.

For companies, investment in human resources through higher pay is vital for their future growth.

In their New Year’s news conferences, business leaders said in unison that they were not concerned about an economic downswing after the Tokyo Olympics this summer as a reaction to a surge in demand before the event. They pointed to the package of measures the government has announced to offset the effects.

If they show a reluctance to grant wage hikes after these remarks, their credibility will be seriously damaged.

Changes in the economic environment and technology inevitably affect the employment system and culture. Individual companies have been struggling to adjust their employment systems to such changes.

But companies should not be allowed to use such changes as a pretext for slashing their workforce or lowering working conditions.