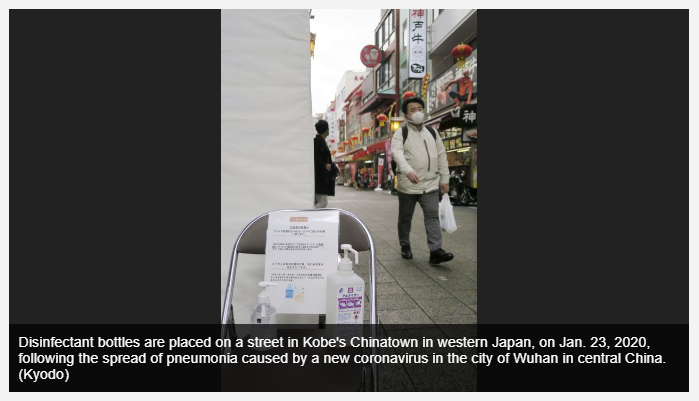 TOKYO — The Japanese retail and tourism industries were on full alert Friday after a second infection with a new deadly coronavirus was confirmed in the country at the start of the Chinese Lunar New Year holidays.

“In Japan, it has not yet spread widely but I am worried about how it will develop,” said a manager at a hotel in Tokyo’s Arakawa Ward where most guests are from Asia, with 40 percent coming from China. The virus has been rapidly spreading from the central Chinese city of Wuhan.

The manager said the hotel is asking guests whether they have a fever or cough during check-in and calling on them to visit a hospital if they do not feel well. All of its employees are wearing masks and taking other precautionary measures.

A culture and tourism center in Asakusa, a spot popular with foreign tourists in Tokyo, has put out a leaflet on the new coronavirus and also decided to seek information from tourists who seek medical help about where their journey to Japan originated.

A fish market in Shimonoseki in western Japan’s Yamaguchi Prefecture, an area famous for its puffer fish cuisine, has also been warning customers about the virus, asking them to wash their hands and gargle in signs written in Japanese, English, Chinese and Korean.

“There will be crowds of people on Saturdays and Sundays. I think asking visitors to wash their hands and take other precautionary measures is going to be even more important,” said Mitsugu Yamasaki, 38, who operates a fresh fish store at the market.

Chinese people are expected to make 3 billion trips during the holidays through next Thursday with more than 7 million people likely to journey overseas, including to Japan.

The Japanese government has been strengthening border control checks at airports, requesting arriving passengers to report fever and other symptoms to inspectors and handing out cards about health examinations.

On Friday, Kazuyoshi Akaba, minister of land, infrastructure, transport and tourism, said passengers on cruise vessels from China will also be under tighter controls to prevent the spread of the virus.

At Kansai airport in Osaka Prefecture, Cheng Minghui, a 24-year-old Chinese working in Fukui Prefecture who was set to return home to Zhengzhou in Henan Province, said, “I want to spend the Lunar New Year holidays with my family but the news (about the virus) worries me.”

Zhang Huiyun, 32, wearing a mask, arrived in Japan from Shanghai for sightseeing. “I have been paying attention to sanitation and will continue to do so in Japan,” she said.

In the Chinatown area of Kobe in western Japan, which has been holding a series of events celebrating the weeklong holidays, organizers installed disinfectors at a dozen spots such as toilets and entrances.

Cao Yingsheng, 63, who heads an organization for stores in the area, said, “All the preparations we can make are in place. I hope customers will enjoy themselves while taking heed to wash hands and gargle.”

But some officials worried whether precautionary measures will be thoroughly implemented.

In Aichi Prefecture in central Japan, which ranked sixth among Japan’s 47 prefectures in attracting Chinese visitors in 2018, an employee at Nagoya Castle said, “Due to cultural differences, it is difficult to ensure all tourists wear masks or disinfect hands.”

Hideyuki Sato, a senior official of Japan Ryokan & Hotel Association with a membership of some 2,500 accommodation facilities in the country, said, “Even if there are limits to what the facilities can do, we want to cooperate to prevent the spread of infections.”

The outbreak of the coronavirus, meanwhile, has added fresh worries to the organizers of the Tokyo Olympics and Paralympics due to kick off in six months.

Virus infections have affected past Olympics, such as the Zika fever in 2016, resulting in some top athletes in golf and tennis withdrawing from the Rio de Janeiro Games.

“Droplet infection (through sneezing and coughing) could occur even in the summertime if a lot of people gather in one place. It is not surprising that the new virus infection is spreading further during the Tokyo Olympics and Paralympics,” said Atsuo Hamada, professor at Tokyo Medical University.