On land and in air, U.S. military spurns requests for Olympics 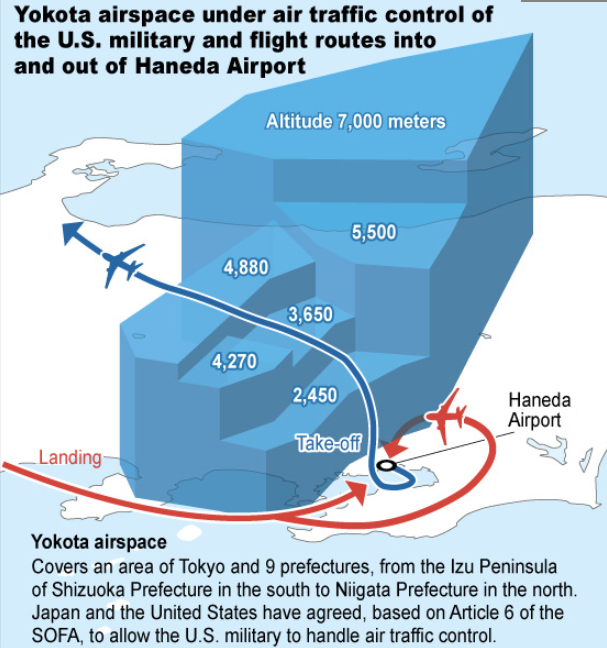 Behind the glitz and glamour in preparations for the 2020 Tokyo Olympics lies a lopsided battle between Japan and the United States that stems from the last time the capital hosted the Summer Games.

Before the 1964 Tokyo Olympics, the United States returned to Japan land for the Washington Heights military housing area in central Tokyo.

The U.S. government made the decision in part to quell anti-U.S. sentiment and protests over the ratification of the Japan-U.S. Security Treaty in 1960.

The land was used as the athletes’ village during the 1964 Games and was later converted into Yoyogi Park as well as the headquarters for Japan Broadcasting Corp. (NHK).

For this year’s Olympic Games, Japanese officials have again sought U.S. cooperation, saying concessions would help improve the U.S. military’s public image, which has been marred by crimes and accidents in Okinawa Prefecture. 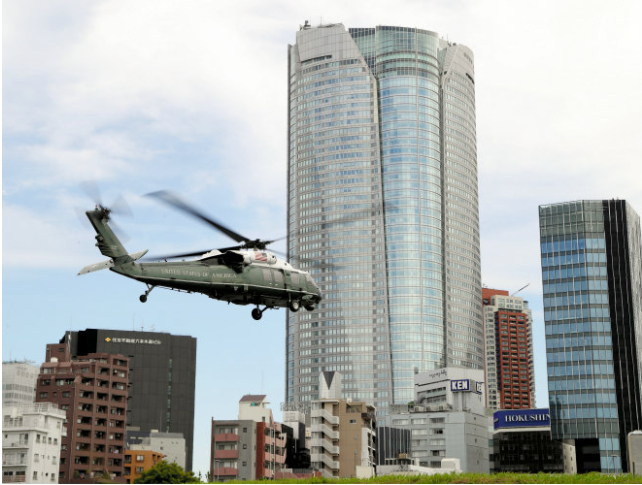 But the U.S. military this time is not budging on calls to return some of the special benefits it has enjoyed over the 60 years since the treaty was ratified.

Last year, Japanese government officials approached their U.S. counterparts about the possibility of allowing commercial jets to use the Yokota Air Base in western Tokyo, given the expected sharp increase in flights to the capital for the Olympics.

Although the matter was taken up by a subcommittee of the Japan-U.S. Joint Committee, which discusses U.S. military operations in Japan, U.S. officials adamantly refused to even negotiate the issue.

Some U.S. officials suggested that Japan had a possible ulterior motive of seeking greater concessions from the U.S. military in the future.

The Japanese government has brought up the possible joint use of the Yokota Air Base by commercial aircraft in the past. 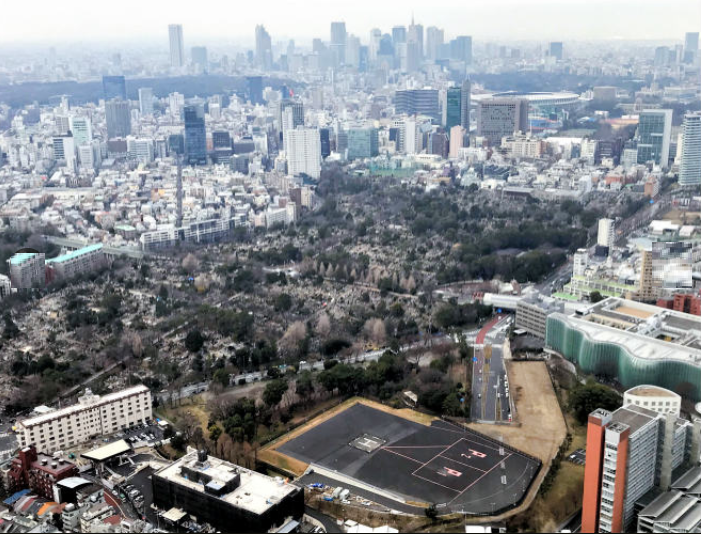 The observation deck on the 52nd floor of the Roppongi Hills complex provides a clear view of the heliport at Hardy Barracks. (Taketsugu Sato)

And in the 2006 agreement regarding the realignment of the U.S. military in Japan, wording was included to consider specific proposals connected to joint use of the Yokota Air Base.

Although the Air Defense Command of the Air Self-Defense Force has been moved to Yokota, no progress has been made on allowing commercial aircraft to use the base.

In an attempt to overcome U.S. opposition, Japanese officials proposed a limited joint use of Yokota just for the Tokyo Olympics.

Some U.S. officials have shown a softening of their position, but there are still no signs of reaching an agreement.

A high-ranking Defense Ministry official said U.S. officials were very concerned that the slightest concession could trigger greater demands, such as “permanent joint use of the Yokota Air Base or even the return of the land for the base.”

Japanese government officials have also asked the United States for the return of control over what is known as “Yokota airspace.”

This airspace extends north from the Izu Peninsula of Shizuoka Prefecture to Niigata Prefecture. 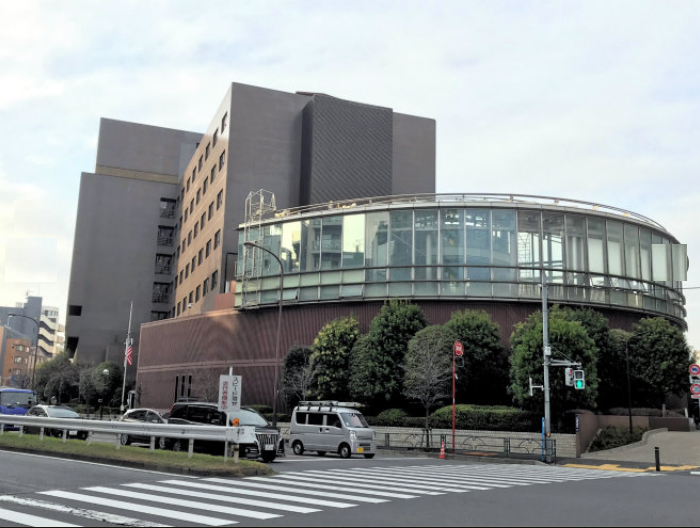 After Japan’s defeat in World War II, the General Headquarters of the Supreme Commander for the Allied Powers (GHQ) gained control of the airspace.

The Status of Forces Agreement (SOFA), also signed between Japan and the United States in 1960, has been used as the basis for continuing to allow the U.S. military to handle air traffic control operations in the Yokota airspace. This means Japanese commercial aircraft cannot enter that airspace for landings and departures at Tokyo’s Haneda Airport without the approval of the U.S. military.

A government source described the Yokota airspace as “an abnormal existence,” explaining that both Germany and Italy, which also have the SOFAs with the United States, handle air traffic control operations over their respective capitals. 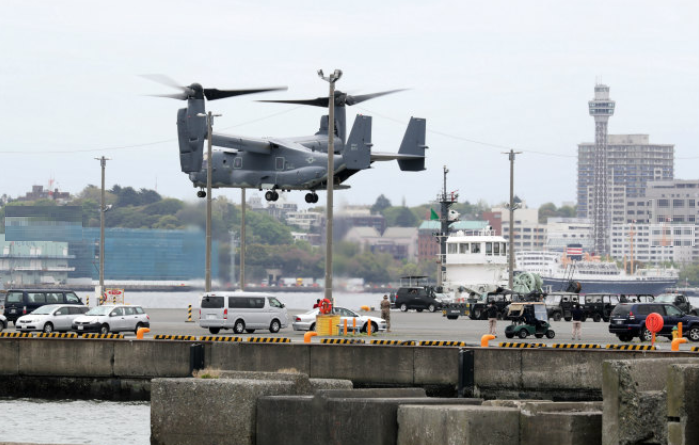 However, high-ranking U.S. military officers insist that air traffic control operations cannot be turned over to Japan given the hub status of the Yokota Air Base for transporting military supplies in the Western Pacific region.

The only concession Japan was able to obtain regarding the Yokota airspace was related to this year’s Olympic Games.

Government officials wanted to establish a new flight route for commercial aircraft using Haneda Airport during the Olympics. The U.S. military agreed to the route, but for only three hours a day.

A government source said Japan had weakened its proposal because if it had suggested the “return” of even part of the Yokota airspace during the negotiations with Washington, no agreement would likely have been made in time for the Olympics.

The SOFA also allows the U.S. military to operate a large heliport at Hardy Barracks, which is located in the prime commercial district of Roppongi in Tokyo. The heliport was used when U.S. President Donald Trump visited Japan in May 2019.

Under the SOFA, U.S. military aircraft can use the heliport and fly at low altitudes that would not normally be allowed under the Civil Aeronautics Law.

Such low-altitude flights cause noise pollution, and both the Tokyo metropolitan and Minato Ward governments have repeatedly asked for the removal of the heliport, but to no avail.

Provisions of the SOFA are often highlighted as unfair whenever crimes and incidents involving U.S. servicemen occur in Okinawa Prefecture, where about 70 percent of U.S. military facilities in Japan are located.

Although major protests have erupted whenever such incidents take place, the SOFA has never been revised since it was signed. All that Japan has been able to achieve concerning the SOFA is getting the U.S. military to revise how some of the provisions are implemented.

Akiko Yamamoto, a lecturer at the University of the Ryukyus in Okinawa who specializes in the history of the Japanese-U.S. relationship, believes past failures to revise the Security Treaty have led to feelings of hopelessness among government officials about ever changing the document.

She cited three occasions when Japanese government officials made a concerted effort to revise the treaty–the 1952 peace treaty, the 1960 revision of the Security Treaty and the return of Okinawa Prefecture to Japanese sovereignty in 1972.

“Diplomatic documents show the government made an effort to reduce the special benefits enjoyed by the U.S. military and to bring about a more equal relationship,” Yamamoto said. “But in the end, those efforts failed. Officials have likely given up on the idea of making another push since those three efforts were all unsuccessful.”

However, Yamamoto also said the government should try to at least revise the SOFA because continued public support of the Security Treaty would require changes in provisions of the SOFA that local governments find especially egregious.