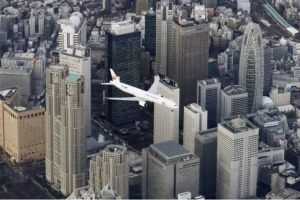 An airplane flies over Shinjuku Ward, Tokyo, on Sunday to test a new low-altitude route set to be introduced in March. | KYODO

Aircraft flew low-altitude routes Sunday over central Tokyo, that are set to be introduced for flights into and out of Haneda Airport, the transport ministry has said.

The flights operated between 4:20 p.m. and 6 p.m., to test out conditions for the new routes that are set to be used for arrivals and departures at the airport from March 29.

More test flights are scheduled to take place for a further six days ahead of March 11.

The change of route will allow the number of international flights operating from Haneda Airport each year to be increased, from up to 60,000 at present to 99,000, excluding early morning and late night hours, according to the ministry.

The new routes pass over areas including Shinagawa and Shibuya wards. Some residents oppose the new routes due to concerns about noise and parts dropping from aircraft while in flight.

“I felt enormous pressure from the aircraft flying at low altitudes,” said Kiwami Omura, head of a group of residents opposing the use of the new routes, after Sunday’s test flights. “I won’t get accustomed to that.”

Currently, landing paths for Haneda pass over Tokyo Bay to avoid noise pollution within the dense city center and the risk of ground casualties in the event of a plane crash. Flights arriving from the west and the south typically pass over Izu Oshima island in Shizuoka Prefecture before making a final approach toward Haneda over the Boso Peninsula in Chiba Prefecture.

Flights from the north, including international flights from Europe, need to take a detour and fly to the Boso Peninsula before making final approaches from Tokyo Bay.

The new routes are designed not only to increase the number of arrivals and departures but also to reduce inefficiency.

Haneda is Asia’s second-busiest airport after Beijing International, but the air routes surrounding Haneda have become known as tough to fly and challenging for pilots.

Their complexity is partially driven by the need to avoid flying over the city center, and out of consideration for the U.S. military — which until the new routes’ introduction will have enjoyed exclusive access to certain altitudes of air space over the area west of Tokyo, known as Yokota Air Space.

Until Tokyo and Washington reached an agreement in January 2019, some west-bound civilian flights were unable to fly through the air zone at all. Currently they have to make a steep ascent after departing from Haneda to avoid U.S.-controlled altitudes within the air space, but with the new routes that will no longer be necessary.