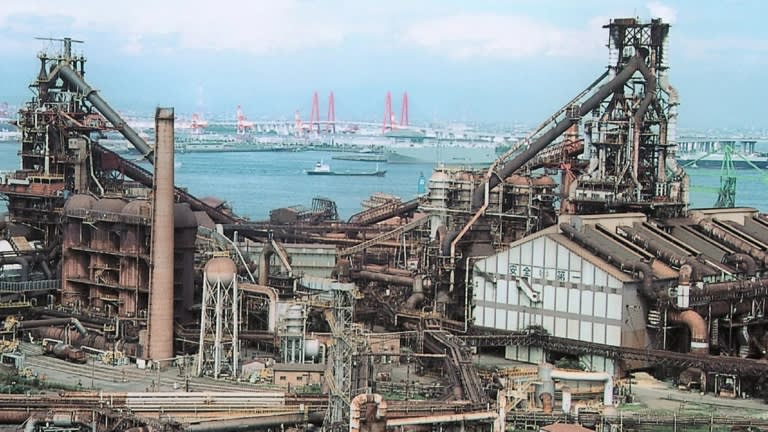 Nippon Steel currently operates 15 blast furnaces across Japan, including these near Nagoya in Aichi Prefecture.

TOKYO — Nippon Steel plans to shut down another blast furnace beyond the three already slated to close, its latest effort to cut overcapacity in Japan caused in part by growing output in China, Nikkei has learned.

The world’s third-largest steelmaker by output intends to halt one of the two blast furnaces at its Wakayama Prefecture works in western Japan within a few years. This would reduce the Nippon Steel group’s domestic crude steel output capacity by about 5% from 54 million tons.

The latest move follows earlier Nikkei reports that the company intends to shut down both blast furnaces at its Hiroshima Prefecture steelworks.

Nippon Steel is to announce the closures, including at the Hiroshima facility, on Friday.

Business conditions in the steel industry have taken a sharp turn for the worse. U.S. tariffs on steel made in China, a front in the two countries’ trade war, caused Chinese output to flood the Asian and European markets. India’s Tata Steel blamed cheap imports into Europe for the slump that prompted it to cut 3,000 jobs there.

Meanwhile, China has been increasing output to stimulate its economy, so prices of iron ore and coking coal remain high.

The Wakayama complex was the main steelworks of the former Sumitomo Metal Industries, which merged with Nippon Steel in 2012. Plans call for freezing the older blast furnace that went onstream in 2009 at a cost of about 51 billion yen ($465 million at current rates).

Nippon Steel will aim to boost efficiency by using only the newer one that began operations last year.

Blast furnaces typically stay in service for decades. The decision to shutter one that has only been running for 11 years is unusual and shows Nippon Steel’s resolve to improve production efficiency and lower costs.

Of Nippon Steel’s 16 steelworks in Japan, 15 blast furnaces at eight sites are currently in operation. The company had earlier decided to close one of two in Fukuoka Prefecture in March 2021. Together, the reduction of four blast furnaces is expected to reduce Nippon Steel’s domestic output capacity by about 15%.

The steelmaker intends to look at the possibility of also consolidating downstream facilities, such as those for producing steel sheet.