Japan in dilemma over how to handle cruise ships 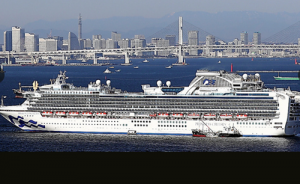 Yomiuri gave top play on Saturday to a report on the fact that many passengers aboard the Diamond Princess have tested positive for the new coronavirus. The paper wrote that the GOJ is worried that the outbreak on the cruise ship may give the international community the impression that Japan has become a “major cluster” of the epidemic. As Japan regards tourism as a major tool for boosting the domestic economy, an unnamed GOJ official reportedly voiced concern by saying: “’Japan passing’ may pick up momentum.” The daily explained that some Pacific island states have banned the entry of people who have stayed in Japan in the past two weeks and advised their citizens not to travel to Japan. The paper added that the WHO has accepted Japan’s view that it does not have to include the 61 Diamond Princess passengers in the tally of patients infected with the virus in Japan.