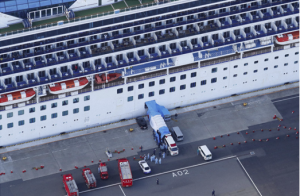 NHK reported in its 7 p.m. news on Saturday on a comment released by the U.S. Embassy regarding the status of the American passengers aboard the Diamond Princess. “We recognize that it is best for them to remain on the ship,” the Embassy was quoted as saying. “We are in close contact with the Japanese government to ensure that the passengers are provided with the necessary food and medication.” The comment was aired following a report on the quarantined passengers, including an American couple who said they are afraid that more people will test positive for the virus and be taken off the ship for transport to the hospital. The couple also reportedly said some American passengers are asking to be allowed to disembark.

The broadcaster separately reported on Saturday night on press remarks made by Health Minister Kato earlier in the day. He reportedly commented on an American couple who in an interview with Reuters said they were hoping for a “diplomatic solution” to allow them to leave the ship. Kato was quoted as saying: “We’ve heard that the U.S. has decided to allow Japan to take the lead under the present circumstances. We want the American citizens to remain on the ship along with the Japanese passengers.”